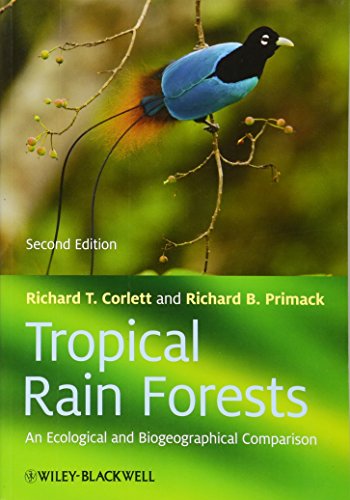 "This well-written, superbly illustrated, book should be compulsory reading for politicians and international bureaucrats, because, however good the ecological science conducted in rainforest, it will be a matter of preaching to the converted if it remains in scientific journals and does not reach the broader public." (Austral Ecology, 11 July 2013) "Recommended. Lower-division undergraduates through graduate student; general readers." (Choice, 1 May 2012) "In summary: this is a fascinating book. I enjoyed it, I learned from it and I recommend it. It will be of value to academics, researchers and students, and, due to its accessible style and illustrations, it will appeal to many others too. Columbus would have found it helpful-but over half a millennium later so might many of us." (Frontiers of biogeography, 3 January 2011)

The first edition of Tropical Rain Forests: an Ecological and Biogeographical Comparison exploded the myth of 'the rain forest' as a single, uniform entity. In reality, the major tropical rain forest regions, in tropical America, Africa, Southeast Asia, Madagascar, and New Guinea, have as many differences as similarities, as a result of their isolation from each other during the evolution of their floras and faunas. This new edition reinforces this message with new examples from recent and on-going research. After an introduction to the environments and geological histories of the major rain forest regions, subsequent chapters focus on plants, primates, carnivores and plant-eaters, birds, fruit bats and gliding animals, and insects, with an emphasis on the ecological and biogeographical differences between regions. This is followed by a new chapter on the unique tropical rain forests of oceanic islands. The final chapter, which has been completely rewritten, deals with the impacts of people on tropical rain forests and discusses possible conservation strategies that take into account the differences highlighted in the previous chapters. This exciting and very readable book, illustrated throughout with color photographs, will be invaluable reading for undergraduate students in a wide range of courses as well as an authoritative reference for graduate and professional ecologists, conservationists, and interested amateurs.