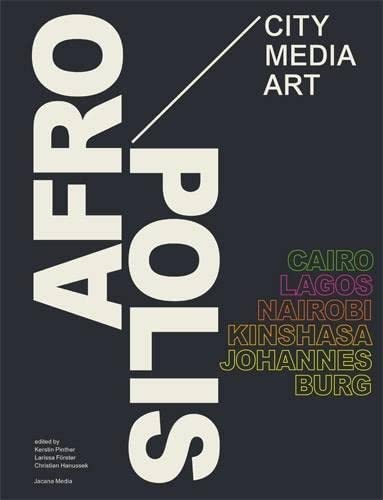 Metropolises often evoke images of flashy high-rise buildings, permanent background noise, backed-up cars and people moving quickly in all directions in their masses. New York, Tokyo, London, Sao Paulo. But what about Cairo? Lagos? Nairobi, Kinshasa, Johannesburg? More than half of the world's population lives in cities. Countries of the South in particular are facing fast-paced globalisation, with the highest rates of urbanisation taking place in African cities. Beyond Western models of urban development, African cities are creating their own urban structures, topography and cultures. How do these structures work? How do the residents of these cities organise their daily lives? What discussions are taking place in Africa about the history and future of cities? And how are artists thinking about and representing urban life in Africa? Lavishly illustrated and meticulously researched, Afropolis is the product of an exhibition developed by the Rautenstrauch-Joest-Museum in Cologne, Germany. The book focuses on the Big Five of African cities: Cairo, Lagos, Nairobi, Kinshasa and Johannesburg, and brings together positions of artistic and cultural studies, as well as detailed histories and the specific dynamics of these African cities, in order to expand our understanding of the concept of urbanity and the phenomenon of the City from an African perspective. This is the first time the book is available in English.

Larissa Forster is a research associate at the Morphomata International Centre for Advanced Studies Genesis, Dynamics and Mediality of Cultural Figurations, University of Cologne. Her doctoral thesis dealt with postcolonial landscapes of memory. She has spent long periods in Namibia and South Africa for her research, which focuses primarily on museum studies, visual and material culture, and the history and cultures of remembrance in southern Africa. She also co-curated the exhibition Namibia - Deutschland: eine geteilte Geschichte: Widerstand, Gewalt, Erinnerung shown in the Rautenstrauch-Joest-Museum in Cologne and the Deutsches Historisches Museum in Berlin (2004/2005). Christian Hanussek, born in Frankfurt am Main in 1953, is an artist, author and curator currently based in Berlin. He studied art and art theory at the Stadelschule in Frankfurt and at ateliers 63 in Haarlem (NL). His art often combines three-dimensional painting with film and video, and his works include a number of permanent installations. Since 2001, he has published a series of articles on art from Africa. In 2005/2006, he curated his project Gleichzeitig in Africa... with exhibitions, seminars and discussions in several German cities. Kerstin Pinther is a Professor for African Art at the Department of Art History, Freie Universitat Berlin. Until early 2010, she was a research fellow at Goethe University Frankfurt/Main. Within her general research fields of photography and visual cultures in West Africa, she is presently focusing on architecture and urbanity in Africa, and on specific issues related to Africa's contemporary art and cultural production in a global context. Her most recent publication is Wege durch Accra. Stadtbilder, Praxen und Diskurse (2010). Kerstin Pinther curated the exhibition Black Paris. Kunst und Geschichte einer schwarzen Diaspora (2006). She has spent periods of research in Accra, Paris, Lagos, and Cairo.