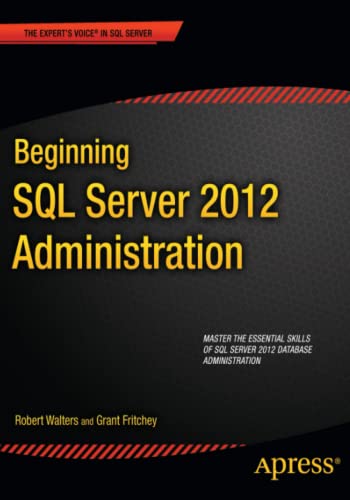 Rob Walters is a data platform technology specialist for Microsoft. His extensive experience with Microsoft SQL Server began over 10 years ago when he worked as a consultant for Microsoft Consulting Services in Denver, Colorado. Shortly after the dot-com bubble burst, Walters returned to Microsoft s headquarters and worked as a program manager in the SQL Server product unit. There, he owned various features within SQL Server including SQL Server Agent, various management features, and the security for the database engine. Walters has co-authored three patents for technologies used within SQL Server. Walters has also co-authored Programming Microsoft SQL Server 2005 by Microsoft Press, and Pro SQL Server 2005, Accelerated SQL Server 2008, and Beginning SQL Server 2008 Database Administration by Apress. He holds a bachelor's of science degree in electrical engineering from Michigan State University and a master's degree in business administration from Seattle University. When not at work, he is very active in his community as an on-call firefighter.