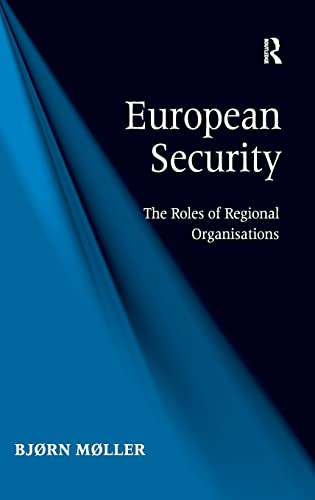 'Offers an insightful and detailed analysis of the role of European regional organisations in promoting and maintaining security within and beyond Europe, including an in-depth overview of the constitutive concepts of security, organisations and regions. An excellent exploration of the underlying reasons for European success in regional security building and a "must read" for scholars and students of European security studies.'Maxi Schoeman, University of Pretoria, South Africa

Europe has undergone quite profound changes since the end of the Cold War. Having been a highly militarised, conflict-ridden and war-ridden region, the core of Europe today constitutes a security community where armed conflicts among the constituent states has become inconceivable. This comprehensive book offers a theoretically founded and thoroughly documented analysis of European security, with a special emphasis on the role played by the United Nations and the various regional and sub-regional organisations, especially the North Atlantic Treaty Organisation, the Organisation for Security and Cooperation in Europe, the Council of Europe and the European Union. When it comes to explaining peace in Europe opinions differ widely. Some argue that it was only because the West refused to give in to Soviet threats that the latter eventually gave up; or that the 'long peace' in Europe was due to the combination of a bipolar alliance structure, pitting the North Atlantic Treaty Organisation (NATO) against the Warsaw Pact, with the presence of nuclear weapons on both sides. Others point instead to the extraordinarily dense network of international institutions and organisations in Europe, offering a wide panoply of fora in which to handle disputes peacefully; or to the web of interdependence in economic and other affairs, tying together all states in Europe in relations which militate strongly against war. Still others believe that the external peace between the states in Europe is simply a reflection of a convergence of cultures, democracies with marked economies that are open towards the world market. These questions are the focal point of this book, which concentrates on security, albeit not in the sense of being a treatise on military matters, but security obtainable by much more indirect and non-military means. It will be required reading for all students and scholars of European security and the organisations which underpin it.