Anthropology in the City: Methodology and Theory (Urban Anthropology)

Anthropology in the City: Methodology and Theory (Urban Anthropology) 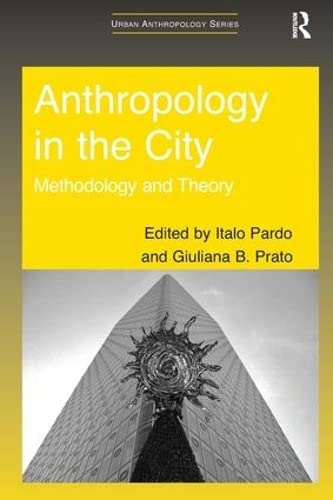 'The excellent chapters brought together by Pardo and Prato in this cutting-edge collection not only demonstrate the continuing vitality of anthropological methods in an urbanized world, but also exemplify the sheer range of novel analytical and theoretical insights that anthropological research in cities can offer. Perfect for students, but also an illuminating read for seasoned professionals inside and outside anthropology.' John Gledhill, University of Manchester, UK 'Field research in anthropology is an "art of the possible" - and in cities, there are many possibilities. The contributors to Anthropology in the City show how they adapt to the variety of local circumstances, and how they seize on opportunities to build new knowledge. So we can learn here how the state of the art continues to be renewed.' Ulf Hannerz, Stockholm University, Sweden 'In Anthropology in the City: Methodology and Theory, the experienced editors, Italo Pardo and Giuliana B. Prato, convincingly argue, via an excellent global collection of essays, for a revival of classical anthropological practices. In the process they demonstrate the unique contribution ethnography offers for a better theoretical as well as practical grasp of our rapidly changing and increasingly complex cities,' Jerome Krase, City University of New York, USA '... a highly interesting text and a timely contribution to the field of urban studies in general and anthropology in the city in particular. The collection is well-edited and structured, it is easy to read and with so many cultural differences as well as fieldwork experiences described it will appeal to graduate students in courses on urban history, politics, globalism and anthropology of urban life... Individual chapters, in particular, will be of great use in discussions surrounding issues such as urban politics, role of elites, gender and sexuality and other topics which they deal with... Clearly, this volume brings new horizons to the discipline and hopefully more studies will emerge in the Ashgate series on urban anthropology edited by Pardo and Prato.' Urbanities: The Journal of the IUAES Commission on Urban Anthropology 'With essays from experts on wide-ranging ethnographic research from fields as diverse as China, Europe, India, Latin and North America and South East Asia, this book demonstrates the contribution that empirically-based anthropological analysis to better understand this rapidly expanding urban world.' Lonaard Magazine 'A plus point of this volume is that the urban ethnographies cover a wide range of locations across the globe, ranging from a modern city like Boston in America to the religious centre of Benaras in India. Thus the reader has the advantage of a panorama of various types of urban cultures and situations. The focus likewise varies from studying markets to politics to sexuality, although as expected the play of power is a key concern in almost all contributions... This volume provides useful theoretical insights for research linking micro with macro perspectives and a local to a more global world. It provides guidelines on how to locate concepts like individual and community into the nation and the global market and to integrate intensive research techniques to an extensive universe.' Social Anthropology 'Engebretsen's excellent contribution on Beijing considers how the 'urban condition' allows for the formation and expression of particular types of queer sociality that raise distinctive methodological and political questions for researchers, and Donner's chapter on the gendering of space in Kolkata provides an incisive, honest, and subtly brilliant discussion of how research in urban India is overshadowed by the blase machismo of male ethnographers and the sexual harassment of female ethnographers. Finally, Parry's chapter presents a fascinating and critical review of the author's forty years of research in Indian villages and cities, which considers the problem inherent in comparing different historical moments in one's own data, and the urban ethnographer's dilemma of how to make inferences about very large places on the basis of very small samples.' Journal of the Royal Anthropological Institute (N.S.)

With half of humanity already living in towns and cities and that proportion expected to increase in the coming decades, society - both Western and non-Western - is fast becoming urban and even mega-urban. As such, research in urban settings is evidently timely and of great importance. Anthropology in the City brings together a leading team of anthropologists to address the complex methodological and theoretical challenges posed by field-research in urban settings, clearly identifying the significance of the anthropological paradigm in urban research and its centrality both to mainstream academic debates and to society more broadly. With essays from experts on wide-ranging ethnographic research from fields as diverse as China, Europe, India, Latin and North America and South East Asia, this book demonstrates the contribution that empirically-based anthropological analysis can make to our understanding of our increasingly urban world.