Freud, Esther Mr Mac and Me

Mr Mac and Me 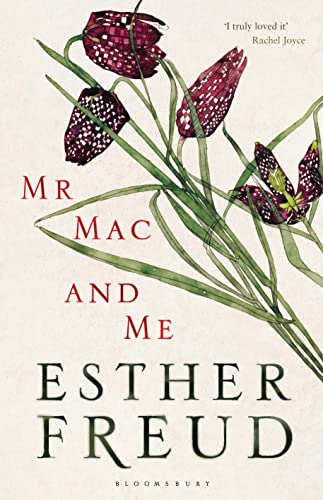 I was utterly absorbed in the language and the story and the world of it ... You know how it is when a writer draws into a place and you begin to feel it is more substantial than the one around you? That is how this book was for me. I truly loved it (Rachel Joyce, author of The Unlikely Pilgrimage of Harold Fry)

It's undoubtedly her most accomplished novel yet . Freud is a modern literary rarity: a born storyteller, poetic but never overwrought; thoughtful but never showy (Alex O’Connell, The Times)

A compelling tale beautifully told, Mr Mac & Me is as close to a perfect novel as anything I've read in a long time. I loved every page of it (Ann Patchett, author of Bel Canto)

Mr Mac and Me is perhaps Freud's finest, most heartfelt book, written in shimmering prose (Herald)

Esther Freud has a remarkable fluency of style . Atmospheric and elegant (Tatler)

This is an evocative, gentle rendering of an English village in wartime and a poignant portrait of life through a young enquiring boy's eyes (Daily Mail)

An elegiac novel of art, war and friendship . Since her first novel, Hideous Kinky (1992), Freud has created a series of convincing child narrators; without condescension or sentimentality, her novels capture painful transitions from innocence to experience . Her fine evocation of Mackintosh's melancholy on the home front, expressed in his painstaking watercolours of local flowers, celebrates the power of art to outlast both man-made and natural disasters (Sunday Telegraph)

Freud's novel is a tantalisingly oblique portrait of Mackintosh in his declining years, but also a personal story placed at the fulcrum of the era when commercialism replaced craftsmanship (Guardian)

There's a quality of luminous wonder too, captured in Freud's delicate, lyrical prose and the tenderness and warmth of her depictions of the various characters that make up village life. But it is Thomas, mysterious Thomas, and brusque, beleaguered Mac, who glow in this compelling story of art, friendship and war (Independent)

It is 1914, and Thomas Maggs, the son of the local publican, lives with his parents and sister in a village on the Suffolk coast. He is the youngest child, and the only son surviving. Life is quiet - shaped by the seasons, fishing and farming, the summer visitors, and the girls who come down from the Highlands every year to gut and pack the herring.

Then one day a mysterious Scotsman arrives. To Thomas he looks for all the world like a detective, in his black cape and hat of felted wool, and the way he puffs on his pipe as if he's Sherlock Holmes. Mac is what the locals call him when they whisper about him in the inn. And whisper they do, for he sets off on his walks at unlikely hours, and stops to examine the humblest flowers. He is seen on the beach, staring out across the waves as if he's searching for clues. But Mac isn't a detective, he's the architect Charles Rennie Mackintosh, and together with his red-haired artist wife, they soon become a source of fascination and wonder to Thomas.

Yet just as Thomas and Mac's friendship begins to blossom, war with Germany is declared. The summer guests flee and are replaced by regiments of soldiers on their way to Belgium, and as the brutality of war weighs increasingly heavily on this coastal community, they become more suspicious of Mac and his curious behaviour.

In this tender and compelling story of an unlikely friendship, Esther Freud paints a vivid portrait of a home front community during the First World War, and of a man who was one of the most brilliant and misunderstood artists of his generation. It is her most beautiful and masterful work.