We're Going On A Bear Hunt 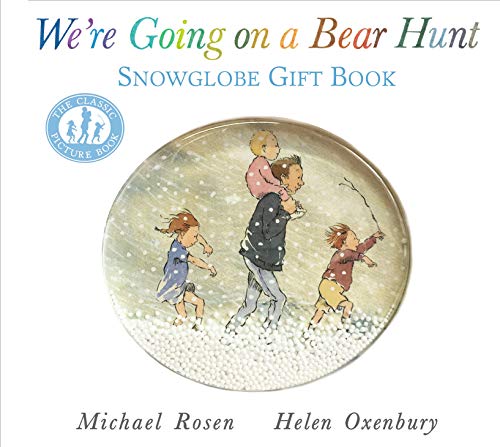 Gorgeous gift edition of the classic join in story by Michael Rosen and Helen Oxenbury. Shake up a snowstorm with this perfect gift for brave hunters and bear-lovers everywhere!We're going on a bear hunt. We're going to catch a big one., Will you come too? For over a quarter of a century, readers have been swishy-swashying and splash-sploshing through this award-winning favourite. This new gift hardback edition includes a superb snow scene on the cover to add fun and festive flurries to your favourite family adventure story. Follow and join in the family's excitement as they wade through the grass, splash through the river, squelch through the mud and brave their way through the swirling, whirling snowstorm in search of a bear., What a surprise awaits them in the cave on the other side of the dark forest!

This is a perfect example of the gift that keeps on giving. * 100% Rock * "The unique snow globe cover adds a special festive flurry to this timeless classic. Little ones will be entranced by the well-loved and beautifully lyrical bear hunt story." * Baby Hampshire *

Michael Rosen is one of the most popular authors of stories and poems for children. His bestselling titles published by Walker Books include Little Rabbit Foo Foo, Michael Rosen’s Sad Book,This Is Our House, Tiny Little Fly, Dear Mother Goose and its sequel Dear Fairy Godmother. He has also written many collections of poetry including Bananas in My Ears. Michael received the Eleanor Farjeon Award for distinguished services to children’s literature in 1997, and was the Children’s Laureate from 2007 to 2009. He is a distinguished critic and academic, co-directing an MA in Children’s Literature at Birkbeck College. He is often called upon to talk about children’s literature and his poetry readings are adored by children and adults. He also presents radio programmes for the BBC. Michael lives in London.

Helen Oxenbury is among the most popular and critically-acclaimed illustrators of all time. Her many award-winning books for children include We’re Going On a Bear Hunt, written by Michael Rosen, Farmer Duck, written by Martin Waddell andThere’s Going to Be a Baby, written by John Burningham; as well as her classic board books for babies. Helen has won the prestigious Kate Greenaway Medal twice – in 1969, for The Quangle Wangle’s Hat and The Dragon of an Ordinary Family and in 1999, for Alice's Adventures in Wonderland. She lives in London.