Milne, A. A. Winnie-the-Pooh: Eeyore Loses a Tail (Winnie the Pooh Classics) 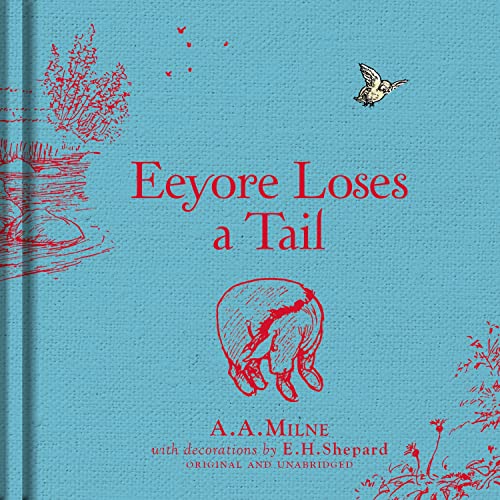 Well either a tail is there or it isn’t there. You can’t make a mistake about it, and yours isn’t there! --

The perfect introduction to Winnie-the-Pooh!

Eeyore’s tail has gone missing and Pooh promises to find it in this charming story by A. A. Milne. This beautiful little storybook is a great way to introduce young readers to the characters in the Hundred Acre Wood. Illustrated with E H Shepard's iconic artwork, this is guaranteed to be a bedtime favourite for children aged 5 and up.

Look out for the other titles in the collection:

Winnie-the-Pooh and the Wrong Bees

The nation’s favourite teddy bear has been delighting generations of children for 90 years.

Milne’s classic children’s stories – featuring Tigger, Piglet, Eeyore, Christopher Robin and, of course, Pooh himself – are both heart-warming and funny, teaching lessons of friendship and  reflecting the power of a child’s imagination like no other story before or since.

A.A. Milne is quite simply one of the most famous children’s authors of all time. He created Winnie-the-Pooh and his friends Piglet, Eeyore, Tigger, Kanga and Roo based on the real nursery toys played with by his son, Christopher Robin. And those characters not only became the stars of his classic children’s books, Winnie-the-Pooh and The House at Pooh Corner, and his poetry for children, they have also been adapted for film, TV and the stage. Through his writings for Punch magazine, A.A. Milne met E.H. Shepard. Shepard went on to draw the original illustrations to accompany Milne’s classics, earning him the name “the man who drew Pooh”.