Moon, Francis C. The Machines of Leonardo Da Vinci and Franz Reuleaux: Kinematics of Machines from the Renaissance to the 20th Century: 02 (History of Mechanism and Machine Science)

The Machines of Leonardo Da Vinci and Franz Reuleaux: Kinematics of Machines from the Renaissance to the 20th Century: 02 (History of Mechanism and Machine Science) 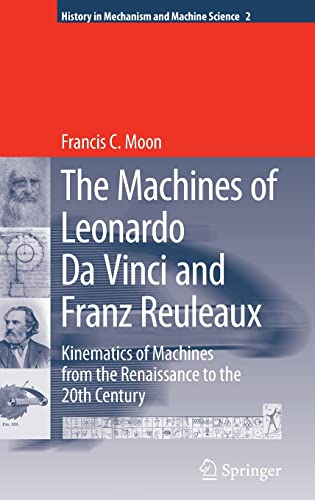 "The book has ... a brief introduction to Da Vinci and Reuleaux and their respective codification approaches, an extensive and accessible evaluation of machine designs and design methods as represented in 20 centuries of design manuals and ‘theater of machines’ books, a brief illustrated reference section on kinematic mechanism components, and an annotated bibliography of historic sources. The book can be used as either a reference or a course resource ... . Summing Up: Recommended. Upper-division undergraduates through faculty." (G. E. Herrick, CHOICE, Vol. 45 (5), January, 2008)

"This book ... focuses on two towering figures in the design of kinematic machines which are separated by some 300 years in history, Leonardo da Vinci and Franz Reuleaux. ... The compilation of the material is of course coloured by personal preferences but it is these preferences but it is these preferences which renders the book a highly interesting one. Many figures from the sources as well as photos of model mechanisms make the book a truly unique one." (Thomas Sonar, Zentralblatt MATH, Vol. 1139 (17), 2008)

"This is an interesting book, rich in information. ... At the end, just after Moon’s detailed comparison of mechanisms as portrayed and described by Leonardo and Reuleaux, the book includes a dozen plates of Cornell’s Reuleaux models. The main bibliography is very impressive ... . Moon hopes that engineering students ... will find stimulation in this book and gain a renewed respect for simple mechanisms and their role in design, and to help them he has included student exercises ... ." (Alexander G. Keller, Technology and Culture, Vol. 50, April, 2009)

This fascinating book will be of as much interest to engineers as to art historians, examining as it does the evolution of machine design methodology from the Renaissance to the Age of Machines in the 19th century. It provides detailed analysis, comparing design concepts of engineers of the 15th century Renaissance and the 19th century age of machines from a workshop tradition to the rational scientific discipline used today.