Verwandte Artikel zu A Field Guide to Happiness: What I Learned in Bhutan...

Leaming, Linda A Field Guide to Happiness: What I Learned in Bhutan about Living, Loving, and Waking Up [Idioma Inglés]

A Field Guide to Happiness: What I Learned in Bhutan about Living, Loving, and Waking Up [Idioma Inglés] 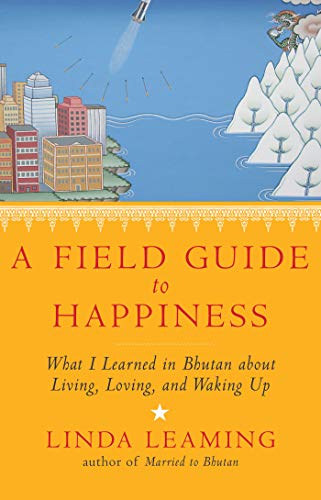 "Now, you've gone and done it, Linda Leaming. This book has impelled me to add a whole new country to my already-overflowing bucket list. But either way, I'm grateful for this most excellent field guide to happiness. Thank you, my fellow traveler, for sharing the love."
-- Pam Grout, #1 New York Times best-selling author of E-Squared and E-Cubed

In the West, we have everything we could possibly need or want—except for peace of mind. So writes Linda Leaming, a harried American who traveled from Nashville, Tennessee, to the rugged Himalayan nation of Bhutan—sometimes called the happiest place on Earth—to teach English and unlearn her politicized and polarized, energetic and impatient way of life. In Bhutan, if I have three things to do in a week, it’s considered busy. In the U.S., I have at least three things to do between breakfast and lunch. After losing her luggage immediately upon arrival, Leaming realized that she also had emotional baggage—a tendency toward inaction, a touch of self-absorption, and a hundred other trite, stupid, embarrassing, and inconsequential things—that needed to get lost as well. Pack up ideas and feelings that tie you down and send you lead-footed down the wrong path. Put them in a metaphorical suitcase and sling it over a metaphorical bridge in your mind. Let the river take them away. Forced by circumstance and her rustic surroundings to embrace a simplified life, Leaming made room for more useful beliefs. The thin air and hard climbs of her mountainous commute put her deeply in touch with her breath, helping her find focus and appreciation. The archaic, glacially paced bureaucracy of a Bhutanese bank taught her to go with the flow—and take up knitting. The ancient ritual of drinking tea brought tranquility, friendship, and, eventually, a husband. Each day, and each adventure, in her adopted home brought new insights and understandings to take back to frantic America, where she now practices the art of "simulating Bhutan." This collection of stories, impressions, and suggestions is a little nudge, a push, a leg up into the rarefied air of paradise—of bright sunlight and beautiful views.