Verwandte Artikel zu Agatha Raisin and the Day the Floods Came: An Agatha... 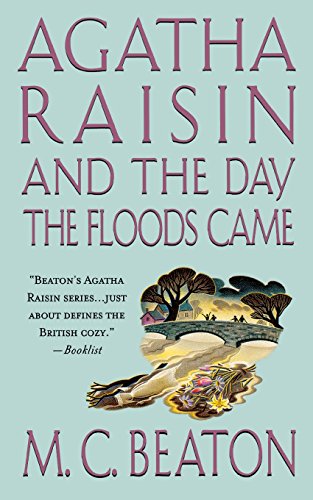 Marital bliss was short-lived for Agatha Raisin. Her marriage to James Lacey was a disaster from the beginning, and in the end, he left her-not for another woman, but for God. After having been miraculously cured of a brain tumor, James has decided to join a monastery in France. Agatha can usually depend on her old friend, Sir Charles Fraith, to be there when times are tough, but even Charles has abandoned her, dashing off to Paris to marry a young French tart.

Miserable and alone, Agatha hops on a plane and heads for a remote island in the South Pacific. To Agatha's surprise, she makes friends with her fellow travelers easily, and keeps herself out of mischief, despite the odd feeling she gets from one particularly attractive honeymooning couple. But when she later finds that the pretty bride has drowned under suspicious circumstances, Agatha wishes she had found a way to intervene.

Returning home to the Cotswolds, Agatha is grimly determined to move on with her life and to forget about James and Charles. They have, after all, forgotten about her. And what better way than to throw herself into another murder investigation? A woman, dressed in a wedding gown and still clutching her bouquet, has just been found floating in a river. The police say it's suicide, but Agatha suspects the girl's flashy young fiancé. With the help of her handsome, and single, new neighbor, Agatha sets off to prove the police wrong.

M.C. Beaton is the Scottish-born author of the Agatha Raisin novels, the Hamish Macbeth series and The Skeleton in the Closet. She lives in a village in the English Cotswolds.