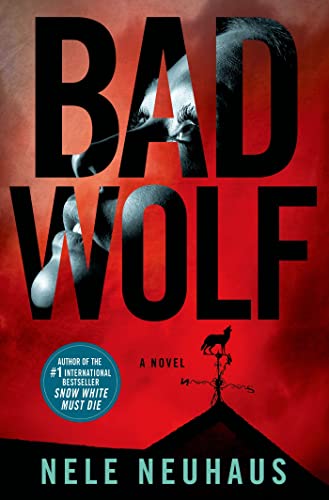 She looked at herself in the mirror, touched her fingertips to the little red hood on her head, and laughed. The dress was a real dirndl, with a short skirt and apron. Papa had plaited her hair into two braids, and she really looked exactly like Little Red Riding Hood in her fairy-tale book.
He always brought presents—it was a secret that she and Papa shared, because he never brought anything for the others. Only for her. She was his favorite.
The door opened, and she uttered a frightened cry when she saw the wolf. But then she had to laugh. It wasn't a real wolf after all; it was only Papa, who had put on a costume. How lovely it was that she was the only one to share this secret with Papa. Too bad she could never remember anything afterward.

On a hot June day, the body of a sixteen-year-old girl washes up on a riverbank outside of Frankfurt. She has been brutally murdered and shows signs of long-term abuse, but no one comes forward with any information as to her identity. Even weeks later, the local police have not been able to find out who she is. Then a new case comes in: A popular television host is attacked, raped, and locked in the trunk of her own car. She survives, barely, and is able to supply only vague hints to the police, having to do with her recent investigations into an organization whose members are from the highest echelons of society, and the potential uncovering of a shocking history they'd prefer to keep from the public eye.
As the two cases collide, Inspectors Pia Kirchhoff and Oliver von Bodenstein dig deep into the past and underneath the veneer of bourgeois society to come up against a terrible secret that is about to impact their personal lives as well. It is almost too late for a person very close to Pia before she and Oliver finally track down the big bad wolf. . . .
In Nele Neuhaus's second U.S. publication of her enormously popular series, tensions run high both inside and outside police headquarters, and a complex and unpredictable plot propels her characters forward at breakneck speed.

NELE NEUHAUS is the author of the well-received Snow White Must Die. With more than three million copies of her books in print, she is one of the most widely read German mystery writers. Neuhaus lives in Germany.