Verwandte Artikel zu The life of the venerable Benedict Joseph Labre [by...

Marconi, Giuseppe Loreto The life of the venerable Benedict Joseph Labre [by G. L. Marconi]. tr. [by J. Barnard]. Together with an appendix, giving an a ccount of several miracles

The life of the venerable Benedict Joseph Labre [by G. L. Marconi]. tr. [by J. Barnard]. Together with an appendix, giving an a ccount of several miracles 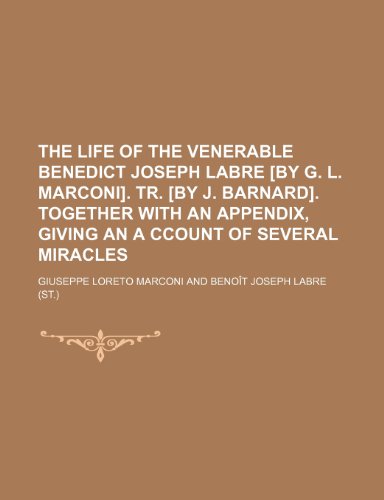 This historic book may have numerous typos and missing text. Purchasers can download a free scanned copy of the original book (without typos) from the publisher. Not indexed. Not illustrated. 1786 Excerpt: ...of June 1782, just aster I had celebrated Mass in the Church of St. Ignatius belonging to the Roman College: I perceived a man whofe appearance at sirst sight was difagreeable and forbidding, his legs were half naked, his esoaths weie tied round the waist with an oki cord: his head-uncombed he was badly cloathed and wrapt up in an old and ragged coat: and in his outward appearance he seemed to be the most miserable beggar that I had ever seen. Such was the appearance of Benedict the sirst time I beheld him. 4 L When. When I had sinished my thanksgiving after Mass, he came up to me, and with a great deal of modesty and respect told me that he had prepared himself to make 3 General Consession, and begged that J would be so charitable as to hear it, and to appoint a day for that purpofe: he af sured me that I might rely on his sincerity: because he did not come with any intention of imposing upon me: and had nothing in view but the sanctisication of his Soul. These sew plain words, and the manner in which he uttered them, immediately insinuated themselves into my heart, and engaged my assection for him. I therefore granted his request, and made no doubt but that he was a good man, and well dispofed. According to my promise I met him at the time we had agreed on. The Servant of God began with order and regularity to lay open the state of his whole lise, and even to explain the minutest particulars with the nicest exactness: from the time of his insancy to the present day; and even mentioned some things which were not to happen to him till aster his death. He difcovered to me both the present state of his Soul, and the honours which God hail im store for him; with the same clearness and precision, with which (in several subsequent conversations I had with him-be...