Buchanan, James The Doctrine of Justification

The Doctrine of Justification 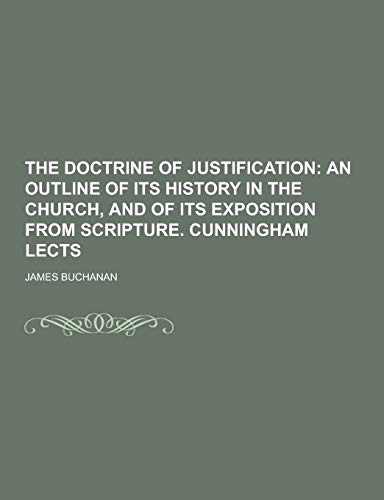 This historic book may have numerous typos and missing text. Purchasers can usually download a free scanned copy of the original book (without typos) from the publisher. Not indexed. Not illustrated. 1867 edition. Excerpt: ... APPENDIX. NOTES TO THE INTRODUCTION. Note 1, p. 9. THE personal experience of the Reformers throws much light on the origin, and causes, of the Reformation. 'The different phases of this work succeeded each other in the mind of him who was to be the instrument of it, before it was publicly accomplished in the world. The knowledge of the Reformation, as effected in the heart of Luther himself, is, in truth, the key to the Reformation of the Church. It is only by studying the work in the individual, that we can comprehend the general work.'--D'Aubigne, History of the Reformation in Europe, 5 vols., vol. i. p. 140. 'His conscience incessantly reminded him, that religion was the one thing needful, and that his first care should be the salvation of his soul. He had learned God's hatred of sin,--he remembered the penalties that His Word denounces against the sinner,--and he asked himself tremblingly, if he were sure that he possessed the favour of God. His conscience answered, No !'...' One day, when he was overwhelmed with despair, an old monk entered his cell, and spoke kindly to him. Luther opened his heart to him, and acquainted him with the fears that disquieted him. The respectable old man was incapable of entering into all his doubts, as Staupitz had done; but he knew his " Credo," and he had found there something to comfort his own heart. He thought he would apply the same remedy to the young brother. Calling his attention, therefore, to the Apostles' Creed, which Luther had learnt in his early childhood at the school at Mansfeld, the old man uttered in simplicity this article,-- "I believe in the forgiveness of sins." These simple words, ingenuously uttered by the pious brother at a critical moment, shed sweet consolation in the mind...