Verwandte Artikel zu The trial at large, of Thomas Paine, for a libel on...

Paine, Thomas The trial at large, of Thomas Paine, for a libel on the King and Constitution, before Lord Kenyon, and a special jury, on Tuesday, December 18, 1792, ... references and able defence is inserted

The trial at large, of Thomas Paine, for a libel on the King and Constitution, before Lord Kenyon, and a special jury, on Tuesday, December 18, 1792, ... references and able defence is inserted 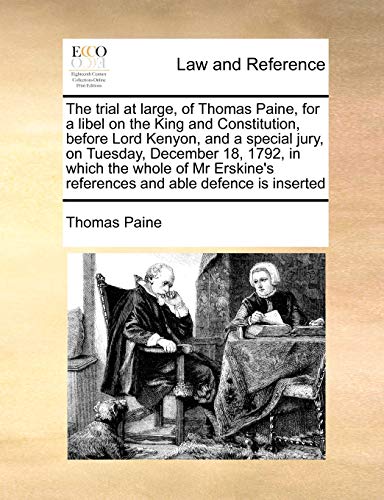 The 18th century was a wealth of knowledge, exploration and rapidly growing technology and expanding record-keeping made possible by advances in the printing press. In its determination to preserve the century of revolution, Gale initiated a revolution of its own: digitization of epic proportions to preserve these invaluable works in the largest archive of its kind. Now for the first time these high-quality digital copies of original 18th century manuscripts are available in print, making them highly accessible to libraries, undergraduate students, and independent scholars.
This collection reveals the history of English common law and Empire law in a vastly changing world of British expansion. Dominating the legal field is the Commentaries of the Law of England by Sir William Blackstone, which first appeared in 1765. Reference works such as almanacs and catalogues continue to educate us by revealing the day-to-day workings of society.
++++
The below data was compiled from various identification fields in the bibliographic record of this title. This data is provided as an additional tool in helping to insure edition identification:
++++
<sourceLibrary>Bodleian Library (Oxford)

<Notes>Also published as 'The trial of Thomas Paine'.

English-born Thomas Paine left behind hearth and home for adventures on the high seas at nineteen. Upon returning to shore, he became a tax officer, and it was this job that inspired him to write The Case of the Officers of Excise in 1772. Paine then immigrated to Philadelphia, and in 1776 he published Common Sense, a defense of American independence from England. After returning to Europe, Paine wrote his famous Rights of Man as a response to criticism of the French Revolution. He was subsequently labeled as an outlaw, leading him to flee to France where he joined the National Convention. However, in 1793 Paine was imprisoned, and during this time he wrote the first part of The Age of Reason, an anti-church text which would go on to be his most famous work. After his release, Paine returned to America where he passed away in 1809.