Verwandte Artikel zu The Jesuit in England; With the Horrors of the Inquisition... 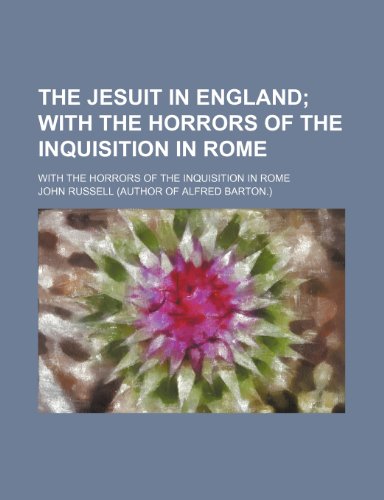 This historic book may have numerous typos, missing text or index. Purchasers can download a free scanned copy of the original book (without typos) from the publisher. 1858. Not illustrated. Excerpt: ... chapter xxxix. Nothing of consequence passed, either at Craven's lodging or at Connaught House, except that Mr. Wilson had supplied the ladies with two excellent servants, the same he had recommended them. Two or three days subsequently, Mr. Charles Courtenay arrived, having enjoyed a remarkably quick voyage from Havre, which port he reached by railway train from Florence, and thence by the same expeditious mode from Plymouth to London. Craven had before called on the Misses Blandford, and told them Charles Courtenay was hourly expected. A glance at Mary, shewed Craven she was all in a flutter. Consequently, on Charles arriving, he found an ornamental envelope, which had been enclosed in that sent to Mr. Craven. It was an invite to a party at Connaught Place; on receiving it, Charles was overjoyed, and expressed himself much delighted with England, also astonished at the vastness of London, compared with Milan. Still he boasted of its superb cathedral, and other buildings. "I will shew you more splendid buildings, and some grand streets. Remember you are not dogged, or watched about here, and that no passport is required; besides there is an efficient police, stationed in every street, so that assassinations are not heard of." "Why," replied Charles, "they are as common as robberies in Italy, and no one appears to know or care about them." "Ah, my friend, is not that one consequent evil attendant on popery, which tyrannizes over the people's souls and bodies, keeping them in ignorance, lest they should be able to regain their liberty." "One horrid result of popery, is, that trade in assassination. Miscreants of wicked and revengeful mind, who know they can receive absolution for any crime, are hired by probably men of superior class, to murder such as are obnoxi...