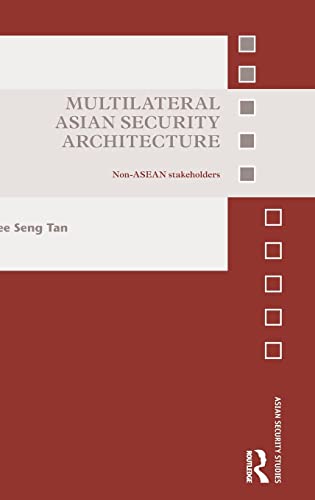 This book provides a comparative assessment of the material and ideational contributions of five countries to the regional architecture of post-Cold War Asia.

In contrast to the usual emphasis placed on the role and centrality of the Association of Southeast Asian Nations (ASEAN) in Asia's multilateral architecture and its component institutions, this book argues that the four non-ASEAN countries of interest here ¾ Australia, Japan, China and the United States ¾ and Indonesia have played and continue to play an influential part in determining the shape and substance of Asian multilateralism from its pre-inception to the present. The work does not contend that existing scholarship overstates ASEAN's significance to the successes and failures of Asia's multilateral enterprise. Rather, it claims that the impact of non-ASEAN stakeholders in innovating multilateral architecture in Asia has been understated. Whether ASEAN has fared well or poorly as a custodian of Asia's regional architecture, the fact remains that the countries considered here, notwithstanding their present discontent over the state of that architecture, are key to understanding the evolution of Asian multilateralism.

This book will be of much interest to students of Asian politics, international organisations, security studies and IR more generally.

See Seng Tan is associate professor, Deputy Director and Head of Research of the Institute of Defence and Strategic Studies at the S. Rajaratnam School of International Studies (RSIS), Nanyang Technological University, Singapore. He is the author of The Making of the Asia Pacific: Knowledge Brokers and the Politics of Representation (2013).