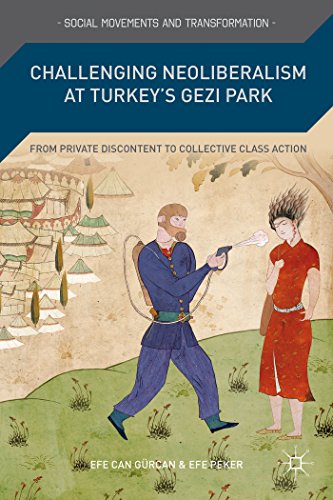 "A brilliant analysis of the social roots of the 'Turkish spring' and the culture of resistance it has created." - Mike Davis, author of Planet of Slums

"This provocative critical analysis of a local movement draws globally-relevant conclusions. Theoretically sophisticated, critically engaged, and strategically nuanced, the authors' account of the Gezi Park mobilization is an exemplary reflective account of innovative disruptive politics in face of a distinctive form of neoliberal politics. Multifaceted in its approach, concerned with conjunctural as well as structural factors, it provides new insights into the Gezi Park movement and offers important lessons for resisting and moving beyond neoliberalism." Bob Jessop, Distinguished Professor and Founding Director of the Institute for Advanced studies, Lancaster University, UK

"Grounded in an acute reading of Turkey's distinctive path of neoliberalization, Gürcan and Peker present a creative and provocative analysis of the cycle of urban protests triggered by the events in Gezi Park. The book deserves to become the definitive account of the Turkish "long summer," and a map to the futures of anti-neoliberal politics." - Jamie Peck, Canada Research Chair in Urban & Regional Political Economy, University of British Columbia, Canada

"Challenging Neoliberalism at Turkey's Gezi Park is a fascinating read which brings together an analysis of Turkey's "neoliberalism with Islamic characteristics" with a discussion of the Gezi/Taksim protests in terms of their class background, the organization of the movement and its remarkable cultural creativity. The authors are to be congratulated on this book, which marks an important step forward in analysis of contemporary Turkish movements." - Laurence Cox, Director of the MA in Community Education, Equality and Social Activism, Maynooth University, Ireland

"The Gezi Park events constitute one of the decisive turning points not only for Turkey, but also for the indigenous global resistance against neoliberal globalization. Gürcan and Peker bring together a superb collection of academic research that offers a valuable analysis of the political economy behind the Gezi trajectory and beyond." - A. Erinç Yeldan, Professor of Economics, Bilkent University, Turkey

"An extremely timely and important book, Gürcan and Peker not only overview in depth the Gezi Park Protests of 2013, but also develop this analysis into a systematic critique of societal change occurring under the Islamist neoliberalism of the AKP regime in Turkey." - Korkut Boratav, Professor Emeritus, Ankara University, Turkey

"'Everywhere is Taksim, everywhere is resistance' was the rallying cry of the wave of popular protests that engulfed Gezi Park in May 2013, challenging the corrosive effects of neoliberalism and authoritarianism on social life in Turkey. Gürcan and Peker provide a highly original and theoretically robust analysis of the Gezi Park protests. They reveal how the collective social movement leadership that was forged during the uprising used a combination of protest tactics to offer a trenchant critique of political power in contemporary Turkey. Challenging Neoliberalism at Turkey's Gezi Park provides an innovative approach for understanding the dynamic structures of emergent social movements." - Nik Theodore, Professor of Urban Planning & Policy, University of Illinois at Chicago, USA

In Challenging Neoliberalism at Turkey's Gezi Park, Gürcan and Peker explore the events of May 31, 2013, when what began as a localized demonstration against the demolition of Gezi Park, a public park in Istanbul turned into a nationwide protest cycle with an unprecedented form and scale never before seen in Turkey's history.