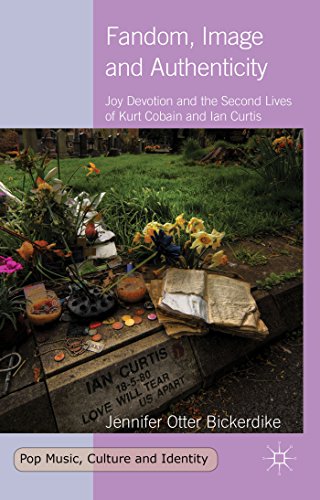 KURT COBAIN AND IAN CURTIS. THROUGH DEATH, THEY BECAME ICONS. HOWEVER, THE LEAD SINGERS HAVE BEEN REMOVED FROM THEIR HUMANITY, REPLACED BY EASILY REPLICATED AND DISTRIBUTED COMMODITIES BEARING THEIR IMAGE. THIS BOOK EXAMINES HOW THE ANGLICISED SINGERS PROVIDE SECULAR GUIDANCE TO THE MODERN CONSUMER IN AN EVER MORE UNCERTAIN WORLD.

Kurt Cobain and Ian Curtis. Their early and unexpected deaths propelled them to iconic status, as beacons for the values of individuality and authenticity. However, with each passing year, the images of the lead men become further removed from
their original humanity. From Converse to cake, this book examines how their 'brands' lend credibility to commerce, while the increasing worth placed on the singers provides a modern example of a secular belief system propelled by media, technology and the value of immediacy in the 2.0 world. Journeys to spaces and places associated with the two singers are akin to pilgrimages, sacred trips that hope to capture and connect with the very essences that the men have been stripped of in their ever-widening appeal. Within this context, Curtis and Cobain become guides and Anglicised role models in the search for personal identity and community in the modern uncertain world.

Jennifer Otter Bickerdike is Senior Lecturer at the University of East London, UK. She started off in the music industry, as College Marketing Representative for Sony Music, touring with Pearl Jam, Rage Against the Machine and a little band called Nirvana. At 25, she went on to be the West Coast Marketing Director for Interscope Geffen A M Records, creating branding and marketing campaigns for artists such as No Doubt, Sting, U2 and Eminem. In 2003, she started her own marketing company, working with a variety of culture industry tastemakers, including L.A.M.B., Facebook and Quannum Projects, while lecturing at San Francisco State University and writing her MA in Humanities on Morrissey fandom as religion. She has recently obtained her PhD in Cultural Studies at Goldsmiths University of London.