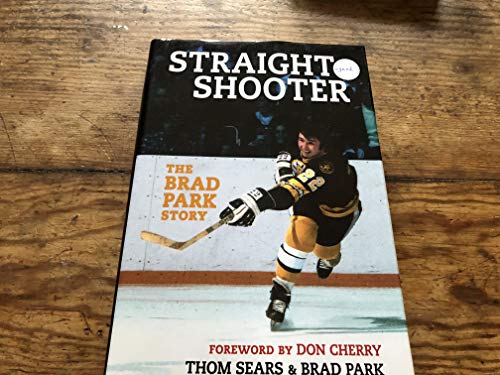 The official biography of an NHL legend By the time he retired, Brad Park had surpassed the great Bobby Orr in career assists by a defenseman. Inducted into the Hockey Hall of Fame the first year he was eligible, and later named one of the Top 100 NHL players of all time by The Hockey News , Park will forever be remembered as one of the greatest men ever to take the ice. The first and only authorized biography of Park's life and career, Straight Shooter: The Brad Park Story , delves deeper into his legendary success than any book has before, bringing together exclusive, candid insights from Park himself, as well as interviews with dozens of players, family members, and key figures from the hockey world. Covering Park's early years growing up in Toronto, to his first exposure to the NHL with the New York Rangers and his stellar performance with the Boston Bruins, through the twilight of his career and retirement, the book examines every aspect of his remarkable life in unprecedented detail. Giving hockey fans a full, frank look at the career of an NHL legend--including the challenges Park faced in his personal life, including caring for his physically handicapped son-- Straight Shooter is a fascinating look at one of the game's true greats. Offers a fascinating insight into the life of Brad Park, one of the greatest defensemen the NHL has ever seen Covers Park's life in detail, from his time with the Rangers and Bruins to his experiences with Team Canada in the 1972 Summit Series Features a Foreword from hockey legend Don Cherry Working closely with Park himself, writer and researcher Thom Sears has created a thorough, authorized biography of one of the NHL's greatest legends and an essential read for hockey fans everywhere.

For a hockey-mad kid from the suburbs of Toronto, Brad Park didn't do too badly.

Playing the game every chance he got, often with his brother or under the watchful eye of his coach father, Brad quickly found the work ethic and talent that would take him far. Rising through the ranks of junior hockey with the Toronto Marlies and Buffalo Bisons, it wasn't long before he was proving himself a key member of the New York Rangers and later the Boston Bruins. But Brad's story is about more than just his time on the ice. It's about life in the NHL, his experiences off the ice, of building teams and what it takes to build a career out of the sport you love. It's about his family, his friendships and the hard work and dedication it takes to balance everything.

Through the highs of playoff rounds and the '72 Summit Series to his trying times with the Detroit Red Wings and the lows of knee surgeries that could have ended his career prematurely, Thom Sears and Brad Park take you on a guided tour deep into the heart of one of the longest and most distinguished careers ever seen in the NHL. Highlights and interviews from other notable stars such as Don Cherry, Walter Tkaczuk, Gerry Cheevers, Jean Ratelle, Rod Gilbert and a host of others, provide additional color, balance and insight.