Stahel, David The Battle for Moscow

The Battle for Moscow 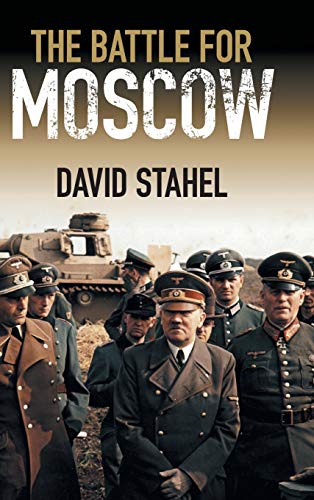 This is a major new account of the German drive on Moscow in November 1941, one of the largest and most significant battles of the Second World War. Drawing on unparalleled research, David Stahel explores the disastrous erosion of German strength, which, even before the Soviet winter had spelled disaster.

'Another excellent account from David Stahel - whose thorough appraisal of the German sources leads to a perceptive overall analysis.' Michael Jones, author of Total War: From Stalingrad to Berlin and after Hitler

'Stahel offers a fresh, definitive look at a major turning point of World War II, illustrating again why he is one of the world's foremost experts on Hitler's attack on Soviet Russia. His writing is taut, insights provocative, and research exhaustive. A masterful achievement!' Craig W. H. Luther, author of Barbarossa Unleashed

'The Battle for Moscow was certainly one of the turning points of the Second World War. In this carefully constructed and well-researched account David Stahel explores the German options in what was clearly becoming an unwinnable campaign. This is solid military history revising what we thought we knew about the war in the East.' Richard Overy, author of The Bombing War: Europe, 1939–1945

'Stahel convincingly argues that an overextended, exhausted and incompetently led Wehrmacht suffered inevitable defeat in front of Moscow. A crisp and judicious account that highlights the German high command's self-delusion.' Jeff Rutherford, author of Combat and Genocide on the Eastern Front: The German Infantry's War, 1941–1944

'... fast-paced and engagingly written, Stahel draws on many primary sources, ranging from letters sent by troops and the war diaries of commanders to previously undocumented army files. His voice remains clear, consistent, and authoritative throughout, as he presents his evidence and guides the reader through the myths and realities.' Curtis Hutchinson, Military History Monthly

'Like the previous three books in the series, The Battle for Moscow is very highly recommended for buffs and scholars alike. Stahel's research, writing, and analysis give us a new and gripping account of one of the greatest and most momentous campaigns in history.' Scott Stephenson, Military Review

'This book covers Germany's Army Group Center for the month of November 1941 ... Stahel's history is predominantly operational: the war as seen from the viewpoint of Army Group and Army commanders. He supplements this narrative with vignettes from the daily lives of cold and demoralized frontline German soldiers, but his theme lies elsewhere ... he has made a powerful argument.' David R. Stone, Slavic Review

'The Battle for Moscow establishes David Stahel alongside Robert Citino as the leading historians of the German Army and the war in the east. This is a superbly argued and crisply presented account of German operational warfare that exposes the strategic bankruptcy of 'Hitler's generals' and lays bare the dire effects of a Nazi 'ethos' on Wehrmacht operations in the east.' Edward Westermann, The Journal of Modern History

In November 1941 Hitler ordered German forces to complete the final drive on the Soviet capital, now less than 100 kilometres away. Army Group Centre was pressed into the attack for one last attempt to break Soviet resistance before the onset of winter. From the German perspective the final drive on Moscow had all the ingredients of a dramatic final battle in the east, which, according to previous accounts, only failed at the gates of Moscow. David Stahel challenges this well-established narrative by demonstrating that the last German offensive of 1941 was a forlorn effort, undermined by operational weakness and poor logistics and driven forward by what he identifies as National Socialist military thinking. With unparalleled research from previously undocumented army files and soldiers' letters, Stahel takes a fresh look at the battle for Moscow, which even before the Soviet winter offensive, threatened disaster for Germany's war in the east.