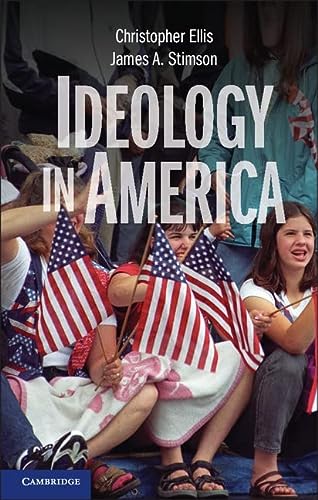 This book explains why the American public thinks of itself as conservative, but supports liberal positions on specific policy matters. Focusing squarely on the contradiction in public attitudes, it provides a broader explanation of American political ideology and how American citizens connect their beliefs to the choices presented by policy-makers.

“With Ideology in America, Christopher Ellis and James Stimson have taken a giant step forward in understanding the complex and seemingly contradictory character of left and right in America. Their book not only explains the simultaneous presence of symbolic conservatism and operational liberalism, but points to perhaps the most important constituency in elections, the conflicted conservative.”
―Thomas B. Edsall, Joseph Pulitzer II and Edith Pulitzer Moore Professor, Columbia Graduate School of Journalism, author of Age of Austerity

“In typically insightful fashion, Ellis and Stimson expound on a fundamental issue in political science: ideology. Jam-packed with data, this book provides an historical account of ideology and the paradox of conservative symbolism and liberal policy preferences. The driving explanations for the paradox, which are Americans’ attitudes towards religion and culture as well as the policy frames of elite actors, are thoroughly documented and convincing. Ellis and Stimson’s pathbreaking work is a must-read for scholars in American politics and political thought.”
―Janet M. Box-Steffensmeier, University Distinguished Scholar, Ohio State University

“This is one of the most important books on public opinion to appear in the past several decades. And over and above its scholarly contribution, it should be required reading for every political pundit who has ever spoken or penned words to the effect that ‘the United States is a center right country.’ American public opinion is much more complicated.”
―Morris P. Fiorina, Stanford University

“Ellis and Stimson shed much-needed light on the complex nature of ideology in the United States by examining the distinction between operational and symbolic ideology in the American public. Ideology in America is clear, engaging, and insightful―required reading for scholars and students of public opinion, political polarization, and American political development.”
―Sunshine Hillygus, Duke University

“In this excellent book, Ellis and Stimson use a sophisticated methodological approach to trace the ebb and flow of ideology in American public opinion over the past 75 years. Their insights are relevant to a variety of audiences. For journalists, commentators, and pundits, Ellis and Stimson show that the public’s liberal-conservative orientations cannot be extracted readily either from election results or from public opinion survey questions. For academics, Stimson and Ellis elaborate on the scholarly consensus that the mass public is largely ‘innocent of ideology.’ Instead, they demonstrate systematic patterns in the ways that citizens ‘misuse’ liberal-conservative terminology to describe their own political orientations. This book represents a major step forward in understanding how ordinary citizens think about the political world.”
―William G. Jacoby, Department of Political Science, Michigan State University; ICPSR, University of Michigan

“In this extended treatment of the paradox of symbolic conservatism and operational liberalism Ellis and Stimson present important evidence for the continuation of the phenomenon first uncovered by Free and Cantril in 1967. They demonstrate that these ‘conflicted conservatives’ remain numerous despite the apparent polarization of the electorate in the recent past, that they differ from the general electorate, and are a force sufficient to change close presidential election outcomes. This is accomplished against the background of a fascinating account of the decline in the symbolic resonance of liberal identification since the 1930s, and of the non-political meanings of conservatism.”
―Kathleen Knight, Columbia University

“This is a compelling book on an interesting and important topic. Ellis and Stimson provide a driving analysis of seemingly every facet of the match and mismatch between people’s policy preferences and ideological identification in America. Predictably strong on social science, the book also is accessible, readable, and engaging. Ideology in America is as good as it gets.”
―Christopher Wlezien, Temple University

James A. Stimson earned his B.A. from the University of Minnesota and his Ph.D. from the University of North Carolina. Stimson is former President of the Midwest Political Science Association and Treasurer of the American Political Science Association. He has authored or co-authored six books: Yeas and Nays (with Donald R. Matthews), Issue Evolution (with Edward G. Carmines), Public Opinion in America, The Macro Polity (with Robert S. Erikson and Michael B. MacKuen), Tides of Consent and Mandate Politics (with Larry Grossback and David A. M. Peterson). A Fellow in the American Academy of Arts and Sciences, he has won the Heinz Eulau and Gladys Kammerer Awards of the American Political Science Association. He is founding editor of Political Analysis and has authored articles in all the major journals of political science.