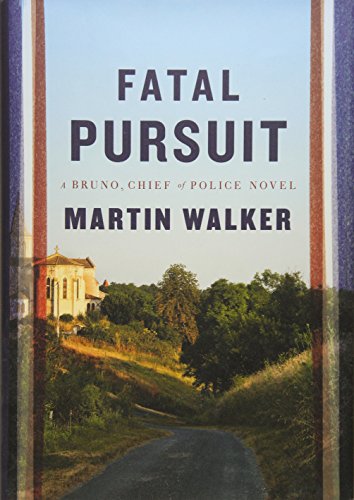 "Both thrilling and truly élégante... Walker has created an object of desire more delectable than the festive meals Bruno always prepares for his friends." --The New York Times Book Review

"Fatal Pursuit is a veritable feast of world-class skullduggery. A genuine plus is the passionate descriptions of the cars and the experience of driving them. This souped-up mystery is another winner." --Open Letters Monthly

"A feast, from scenery to food to Bugattis." --Booklist, starred review "Engagingly droll... Readers can expect great plot and great milieu, but the icing on the gâteau is Bruno himself. Of all the cops in all the cop books I've read, he is the one whose home I would like to visit, to partake in one of his delicious-sounding meals and perhaps a bottle of Bergerac red." --BookPage "[A] pleasing puzzle." --Kirkus Reviews "Clever, witty, and satisfying from beginning to end... Walker continues to write a series that remains inventive and yet retains its initial seductive charms." --Popular Culture Association Mystery & Detective Fiction List Reseńa del editor:

A pair of murders, a romance and rivals in pursuit of a long-lost vintage car of unfathomable value—Bruno, chief of police, is busy in another mystery set in the beautiful Dordogne

At the annual fête in St. Denis, Bruno’s biggest worry is surviving as a last-minute replacement navigator in a car rally race. The contest and a classic-car parade are new to the festivities and draw a spate of outsiders with deep pockets, big-city egos and, in the case of a young Englishman, an intriguing story. It’s the tale of a Bugatti Type 57C, lost somewhere in France during World War II. Among the most beautiful cars ever made, one of only four of its kind—Ralph Lauren owns one—it is worth millions and drives its pursuers mad with greed. In the midst of the festivities, a local scholar turns up dead and Bruno suspects unnatural causes. After a second death, there is mounting evidence that the events in St. Denis are linked to international crime.

To make matters even more complicated, a family squabble over land brings to St. Denis a comely Parisienne who turns Bruno’s head. As usual, Bruno’s life offers its challenges—but there is always time for a good bottle and a home-cooked meal.