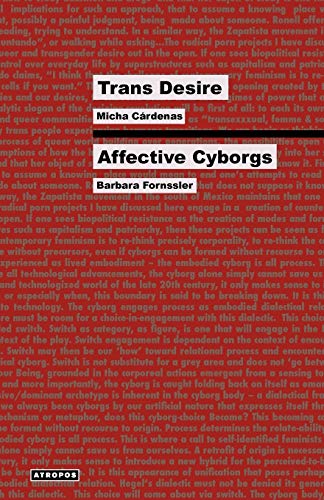 Reviews for Trans Desire: Micha Cárdenas takes apart the terms and implicit contract binding the project of "Master Thesis." What is it to master an object of inquiry that resists boundary control or conceptual arrest? How does one pursue a thesis when genre and gender assignments are continually destabilized? Situated between soft rant and manifesto, between autobiographeme and scholarship, between single and double authorship, _Trans Desire_ bravely faces down the quirky habits of our bildopedic culture, reformatting the very conditions of institutional submission. Avital Ronell In this powerful meta-account of transgressive embodiments and desires, Cárdenas enunciates a rousing, theoretically complex and practically explicit politic of resistance which will resonate with scholar and layperson alike. Allucquére Rosanne Stone In Trans Desire, Micha Cárdenas offers a moving and provocative exploration of transgender desire, its limits, and its potential for biopolitical resistance. At an intersection of poetics and theory, Cárdenas embraces a queer ethico-politics devoted to radically challenging not only heteronormativity but the oppressive power of Empire more broadly. Diane Davis Affective Cyborgs is framed as a necessary departure from Donna Haraway's cyborg. Appropriated from the complex sexual politics of BDSM culture, the figure of the "switch" is proposed as a new possibility for conceptualizing agency in our encounters with technology. A doubling of the cyborg body, the switch locates the liminal space in which the binary of dominance and submission may be explored as a contextual and meshed embodiment of contingency, materialized via affective decision. This framing suggests new directions for feminist philosophies of technology. About the authors: Micha Cárdenas [transreal.org] is an artist/theorist and a Lecturer in the Visual Arts Department and the Critical Gender Studies program at the University of California, San Diego. She received her MA in Communication at the European Graduate School, Saas-Fee, Switzerland and her MFA from UCSD. Barbara Fornssler is a PhD student at the European Graduate School in Saas-Fee, Switzerland, and a writer whose research interests include the body and technology, multimodal communication, and philosophies of gender.

Schirmacher is a philosopher of technology. He currently teaches Media Philosophy at the New School for Social Research in New York and is Professor in the Science-Technology-Society Program at Penn State University.