Hunter, Holly Pressure is a Privilege: Lessons I've Learned from Life and the Battle of the Sexes (Billie Jean King Library)

Pressure is a Privilege: Lessons I've Learned from Life and the Battle of the Sexes (Billie Jean King Library) 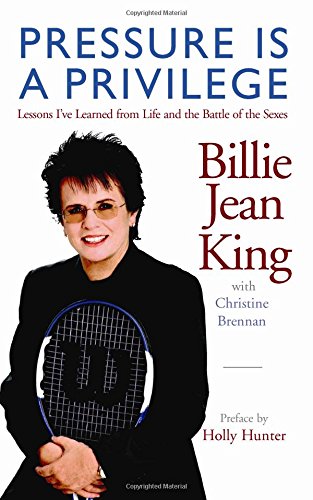 The tennis star recounts her life and athletic career, from childhood, through her athletic successes, to her life after professional tennis, and discusses the life lessons that she learned at every stage along the way.

About the authors: Visionary, innovator, champion, and one of the most illustrious and celebrated tennis players of her generation, Billie Jean King is recognized for her life-long struggle for gender equality, both on and off the court. She empowered women and educated men when she defeated Bobby Riggs in the Battle of the Sexes in 1973. King won 39 Grand Slam singles, doubles and mixed doubles tennis titles, including a record 20 championships at Wimbledon. Ranked No.1 in her tennis career, she created inroads for women in sports and beyond. Christine Brennan is an award-winning sports columnist for USA Today. The author of several books, she is also a commentator on ABC News, ESPN and NPR. Academy Award-winner Holly Hunter has been a friend and admirer of Billie Jean for many years, and starred as King in the film dramatization of the Battle of the Sexes, When Billie Beat Bobby.