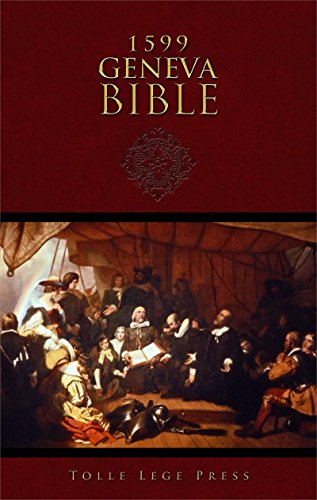 When the Pilgrims arrived in the New World in 1620, they brought along supplies, a consuming passion to advance the Kingdom of Christ, and the Word of God. Clearly, their most precious cargo was the Biblespecifically, the 1599 Geneva Bible. All but forgotten in our day, this version of the Bible was the most widely read and influential English Bible of the sixteenth and seventeenth centuries. A superb translation, it was the product of the best Protestant scholars of the day and become the Bible of choice for many of the greatest writers and thinkers of that time. Men such as William Shakespeare, John Bunyan, and John Milton used the Geneva Bible in their writings. William Bradford also cited the Geneva Bible in his famous book Of Plymouth Plantation.The Geneva Bible is unique among all other Bibles. It was the first Bible to use chapters and numbered verses and became the most popular version of its time because of the extensive marginal notes. These notes, written by Reformation leaders such as John Calvin, John Knox, Miles Coverdale, William Whittingham, Anthony Gilby, and others, were included to explain and interpret the Scriptures for the common people. Word-for-word accuracy of the 1599 Geneva translation, Modern spelling, Easy-to-read print, Middle English Glossary, Original cross references, Thousands of original study notes by the Reformers, Includes articles by Gary DeMar and Dr. Marshall Foster on the history of the Geneva Bible, Free CD-ROM that includes The 1599 Geneva Bible, Apocrypha, & Metrical Psalms in searchable PDF format.