Verwandte Artikel zu Pain, Sex and Time: A New Outlook on Evolution and...

Heard, Gerald Pain, Sex and Time: A New Outlook on Evolution and the Future of Man (Provenance Editions)

Pain, Sex and Time: A New Outlook on Evolution and the Future of Man (Provenance Editions) 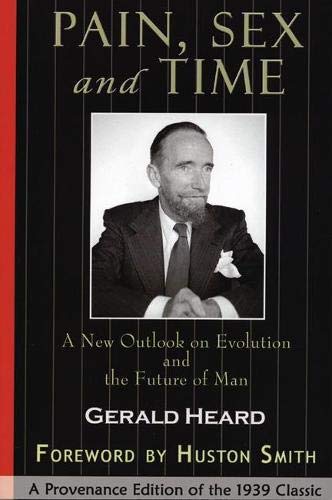 "Pain, Sex and Time" explores evolution and postulates the possibility and means of a future evolution of the mind. First published in 1939, its philosophy converted a generation of leading thinkers from the scientific worldview to the perspective of the mystics.Gerald Heard (1889-1971) was a well-known British polymath and science commentator for the BBC. He later toured and lectured prolifically in the United States. Heard wrote thirty-eight books including The Ascent of Humanity, The Social Substance of Religion and A Taste for Honey, a detective story which sold over half a million copies. Referring to Heard's influence on Western notables, Ellery Queen wrote, "Gerald Heard is the spiritual godfather of this Western movement." Aldous Huxley (from his 1939 review of "Pain, Sex and Time"): "Gerald Heard's book represents a significant attempt to reinterpret in contemporary terms and in the light of modern knowledge the teachings, practical no less than theoretical, of the traditional religious philosophies..."Professor Huston Smith, (from his 2004 Foreword toPain, Sex and Time): "Overnight, the book in hand converted me from the scientific worldview to the vaster world of the mystics. I applaud the decision to bring this book back into print."In this absorbing and provocative book, Gerald Heard shows that a fissure in human consciousness, which has been rapidly widening for 400 years, is the cause of modern man's tragic dismay. Believing his problem external, when it is really in his own mind, man at last faces a "veritable Copernican revolution" psychologically. Science tells us that man is the only animal capable of continued evolution. It shows further that he can evolve in only one way--mentally. "Pain, Sex and Time" is then a new outlook, a new promise for the future, a new exploration of those strange and little-known powers of human consciousness of which man is becoming increasingly aware. Harper & Brothers, 1939"Pain, Sex and Time" was James Dean's favorite book."Pain, Sex and Time" has been out of print for 60 years.

Pain, Sex and Time explores evolution and postulates the possibility and means of a future evolution of the mind