The Religion of Man (Provenance Editions) 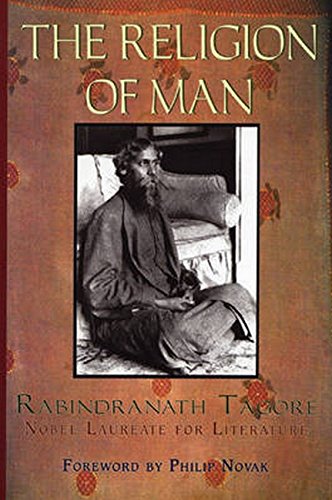 Tagore is unequivocal in his faith. He appreciates the intellectual triumphs of science, but he writes as a poet and philosopher. Man must always be a music-maker and dreamer of dreams; he must never lose, in his material quests, his longing for the touch of the divine. He traces the growth of the idea of God from primitive notions to universality. Today, as he says, all barriers are down and the the God of humanity has arrived at the gates of the ruined temple of the tribe. His book rings with joy and affirmation overstepping all limitations of race and creed. His estimates of western civilization are searching and some of them written in acid one reads much between the lines-but Tagore recognizes the true strength of the west and the faults of the east. The lectures are actually a superb and haunting criticism and evaluation of life from the viewpoint of an immemorial philosophy by a wise man. -"Christian Century"This is a book for everyone: a book whose human interest and pervading charm assure it a wide appeal and lasting value. It is not a philosophical work, as its author repeatedly warns us; in fact, its one semi-philosophical chapter (the first) may well be omitted. Its value is religious and poetical; like the essays of Emerson, it is primarily a document of the spiritual life. -"Journal of Religion" Rich in profound thought and poetic speech he has never written anything so penetrating and illumination on the nature of things Tagore has seen visions, and he can paint them for us with a compelling charm due to utter simplicity and fidelity. But he has not stopped there. His reason hs entered into truth by the doors which his intuition has opened A treasure-store of truth, beauty and wisdom. -"New Chronicle "Rabindranath Tagore (1861-1941) was the youngest son of Debendranath Tagore, a leader of the Brahmo Samaj, which was a new religious sect in nineteenth-century Bengal and which attempted a revival of the ultimate monistic basis of Hinduism as laid down in the Upanishads. He was educated at home; and although at seventeen he was sent to England for formal schooling, he did not finish his studies there. In his mature years, in addition to his many-sided literary activities, he managed the family estates, a project which brought him into close touch with common humanity and increased his interest in social reforms. He also started an experimental school at Shantiniketan where he tried his Upanishadic ideals of education. From time to time he participated in the Indian nationalist movement, though in his own non-sentimental and visionary way; and Gandhi, the political father of modern India, was his devoted friend. Tagore was knighted by the ruling British Government in 1915, but within a few years he resigned the honour as a protest against British policies in India. Tagore had early success as a writer in his native Bengal. With his translations of some of his poems he became rapidly known in the West. In fact his fame attained a luminous height, taking him across continents on lecture tours and tours of friendship. For the world he became the voice of India's spiritual heritage; and for India, especially for Bengal, he became a great living institution.This autobiography/biography was written at the time of the award and later published in the book series Les Prix Nobel/Nobel Lectures.Philip Novak is the author of The World's Wisdom, a widely used anthology of the sacred texts of the world's religions and the companion reader to "Huston Smith's The World's Religions.""

Philip Novak is a professor of philosophy and religion at Dominican University in San Rafael, California, where he has taught for over twenty years and the author of The World's Wisdom, a widely used anthology of the sacred texts of the world's religions, and the companion reader to Huston's Smith's The World's Religions.