Field to Feast: The Remington Cookbook 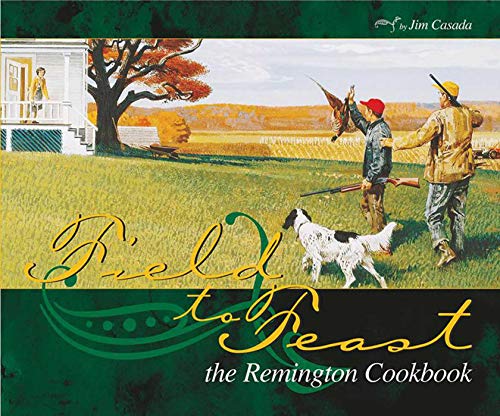 The phrase, straight shooter, is as American as apple pie, and there was a time when those words were an important link to another time-honored phrase, putting meat on the table. Today, however, most of us no longer live close to the land and we tend to associate the essentials for meal preparation with grocery store shelves and showcases rather than fields and forests. Yet, enjoying a game feast brings a special sense of self-satisfaction. Sitting down to a fine meal featuring game you have killed, cleaned and cooked offers a reward no food from a restaurant or meat market can match. The folks at Remington Arms Company, along with the untold millions of Americans who have hunted with Remington guns and ammunition for generation, are keenly aware of this aspect of the sporting experience. For them, the allure of the quest remains strong, and appreciation of the fact that the sportsman eats what he kills is a defining aspect of hunting ethics. This book is written with that sense of what is right and proper firmly in mind, but it is also intended to provide a culinary excursion into realms of pure pleasure. With the exception of a chapter where various Remington employees, past and present, share their favorite ways of preparing food, the recipes come from Jim and Ann Casada. For them, wild fare and its preparation is an integral part of daily life. Both grew up in homes where game on the family table was a mainstay of life. Over the years their shared background in game cookery, along with a love of the culinary arts, has led to the development of hundreds of recipes and publication of a number of widely acclaimed cookbooks. In these pages the Casadas offer a wide array of recipes ranging across the whole spectrum of game cookery. From sumptuous dishes featuring prime cuts of venison that would do a four-star restaurant proud to simple yet delicious soups and stews, you will find something for every taste. The authors recipes mirror their cooking philosophy.