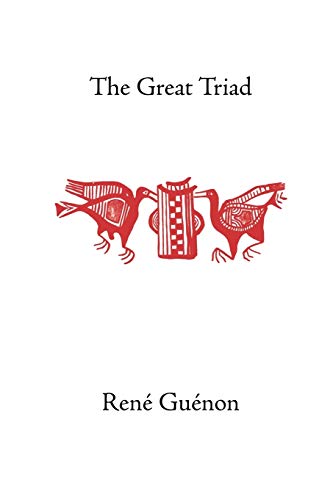 Guénon's The Great Triad was the last book to appear during his lifetime. Even for his regular readers, this book contained largely new material, as did his The Metaphysical Principles of the Infinitesimal Calculus, published the same year. The author here refers especially to the Chinese tradition, principally in its Taoist form (though touching on Confucianism as well), in which the 'Great Triad' is defined as Heaven-Man-Earth. It is as much a cosmological as a metaphysical doctrine that is implied in this ternary of the 'three worlds'. In spite of its Taoist title, however, the work draws heavily on Hermetic teachings, Hindu and Buddhist metaphysics, and Masonic symbolism, not to mention doctrines from Judaism, Christianity. and Islam. It is also Guenon's most comprehensive exposition of the science of Alchemy.

René Guénon (1886–1951) was one of the great luminaries of the twentieth century, whose critique of the modern world has stood fast against the shifting sands of intellectual fashion. His extensive writings, now finally available in English, are a providential treasure-trove for the modern seeker: while pointing ceaselessly to the perennial wisdom found in past cultures ranging from the Shamanistic to the Indian and Chinese, the Hellenic and Judaic, the Christian and Islamic, and including also Alchemy, Hermeticism, and other esoteric currents, they direct the reader also to the deepest level of religious praxis, emphasizing the need for affiliation with a revealed tradition even while acknowledging the final identity of all spiritual paths as they approach the summit of spiritual realization. René Guénon, of whom Jacob Needleman wrote in The Sword of Gnosis that ‘no other modern writer has so effectively communicated the absoluteness of truth,’ is gradually being recognized by deeper thinkers as one of the few who have truly penetrated the seductive veil of the modern age. As an expositor of pure metaphysics and its application to the science of symbols, Guénon is without peer; and his extraordinarily prescient critique of the modern world is attracting more and more attention among cultural commentators. Little known in the English-speaking world till the recent appearance of his Collected Works in translation, Guénon has nevertheless long been recognized as a veritable criterion of truth by a vanguard of remarkable writers who evince that rare combination: intellectuality and spirituality. After a lonely childhood, often interrupted by ill health, Guénon navigated the seductive half-truths of occultism toward a deeper, unified vision offering a way out from the confusion and fragmentation of our time. Regarded by leading scholars as the first truly authentic interpreter of many Eastern doctrines in the West, Guénon never tired, in face of the seemingly inexorable process of dissolution in the twentieth century, of pointing to the transcendent unity of all religious faiths and the abiding Truth that contains them all.