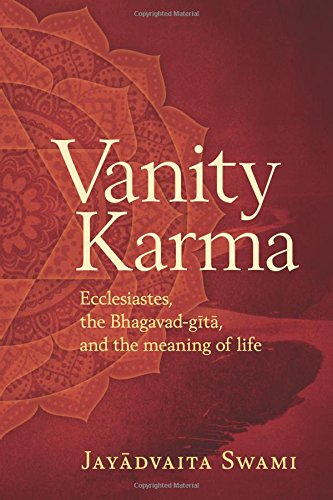 Ecclesiastes, “the strangest book in the Bible,” begins with a powerfully expressed argument that our life on earth is pointless, that we spend it working hard for “vanity,” for nothing better than vapor—and then die and disappear into oblivion.Work for pleasure brings emptiness, says the speaker of the book, and seeking knowledge brings only greater frustration. The sun forever rises and sets, generations forever come and go, and there is nothing new under the sun. “Vanity of vanities,” cries the speaker. “All is vanity!” All is in vain.The power and eloquence with which this bleak view is explored, the beauty of the book's celebrated poem on time and seasons, the richness of the book's proverbial insights, and a refusal to settle for dogmatic platitudes have made Ecclesiastes a perennial classic.Hemingway, Tolstoy, and Melville, Orwell, Updike, and T.S. Eliot all drew from it. Shaw equated it with books by Shakespeare. Its lyrical “To everything there is a season. . .” became the much-loved song “Turn! Turn! Turn!” Thomas Wolfe wrote, “I am not given to dogmatic judgments in the matter of literary creation, but if I had to make one, I could only say that Ecclesiastes is the greatest single piece of writing I have ever known, and the wisdom expressed in it the most lasting and profound.” In the 1960s this wisdom profoundly moved a young Jewish American boy, starting him on a quest for meaning that led him to the Bhagavad-gita, India's quintessential text of spiritual wisdom.The Gita too begins with a collapse of meaning, as the warrior Arjuna finds himself at the brink of a war in which he must bear arms against his own teacher, family, and friends—a war in which winning, he cries, would be worse than death.Standing between the two armies, the war about to begin, Arjuna's divine charioteer Sri Krishna enlightens Arjuna with a message of immortal spiritual realization.And so it is that Tolstoy, Emerson, Eliot, Gandhi, and countless others have turned again and again to what Thoreau called “the stupendous and cosmogonal philosophy of the Bhagavad-gita.” After following the teachings of the Gita for more than forty-five years, in Vanity Karma our young Jewish American boy, now grown old, looks deeply into Ecclesiastes again.Vanity Karma includes the full text of Ecclesiastes in a modern English rendering, with an illuminating commentary on each verse.The plain-language commentary is followed by meticulous notes, making Vanity Karma valuable for the seeker, for the scholar, and for anyone who has ever asked, “What is the meaning of my life?”

Jayadvaita Swami--writer, editor, publisher, and teacher--is an American monk in the Indian tradition of Krishna spirituality. He has edited more than forty books, mainly translations and commentaries for Sanskrit spiritual texts. He oversees the African division of the Bhaktivedanta Book Trust, the world's largest publisher of India's spiritual classics.Traveling year round, he has taught in more than sixty countries. He speaks especially from the original book of yoga, the Bhagavad-gita, India's best-known text of spiritual wisdom.In the 1980s he spent a year and half traveling in India on foot, staying in a different town or village every night. He walked about ten thousand miles.He is the author of Vanity Karma: Ecclesiastes, the Bhagavad-gita, and the Search for the Meaning of Life.