Verwandte Artikel zu We Can Sleep Later: Alfred D.Hershey and the Origins...

We Can Sleep Later: Alfred D.Hershey and the Origins of Molecular Biology

We Can Sleep Later: Alfred D.Hershey and the Origins of Molecular Biology 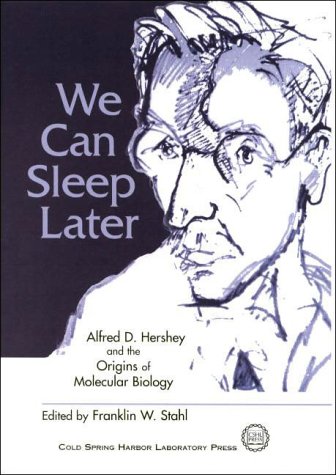 An absorbing portrait of the pioneering molecular biologist best known for demonstrating that DNA is the genetic component of phages, through essays and reminiscences from twenty-three distinguished scientists whose work and careers were influenced by the man and his science.

This collection opens a unique window into the early days of molecular biology and the life of an extremely private scientist to whom personal satisfaction with an experiment well done was more important than acclaim. The reader is left with a feeling of regret that Hershey and his brand of methodical, concise science are no longer with us. American Scientist The title of the book seems scarcely appropriate for a man who famously napped twice a day (in a cycle that was convenient for phage genetics, but less so for human interaction), but reflects a final important role for Hershey, as a stringent and constructive editor of scientific papers. He was one of the begetters of the marvelous 1971 Cold Spring Harbor monograph The Bacteriophage Lambda, and 'we can sleep later' was his exhortation to lagging writers to get their manuscripts for this book in on time. That volume, and the first in the series, The Lactose Operon, set the tone for the long and important series of Cold Spring Harbor monographs, which have had profound influence in the world of molecular biology. It is particularly fitting that Cold Spring Harbor should honour the memory of Hershey in this way. Nature Cell Biology We Can Sleep Later is a must read for anyone with a serious interest in what has often been referred to as 'the Golden Age' of molecular biology. Part one and two provide an appropriate tribute to a true giant in the field, giving the reader a personal view of Hershey the man and also what it was like to be doing research at this time. In part three, some of Hershey's classic papers are reprinted. In addition to the famous Hershey Chase paper, included are his Nobel Prize lecture and Genes and Hereditary Characteristics. This essay gives his unflinching critical appraisal of ideas about genetic determination. His annual reports are an invaluable font of information about the tremendous progress and problems that were being made in molecular biology from 1950-1970. History and Philosophy of the Life Sciences