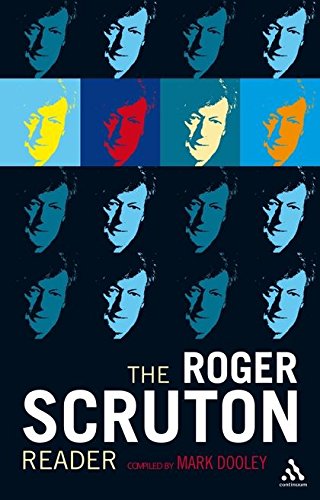 'This is a book brimming with observations and arguments, some surprising, many provocative, all engaging.'- Chandran Kukathas, The American Conservative Author article in Irish Daily Mail 'An excellent introduction to [Scruton's] range of interests' - Kenneth Minogue, Times Literary Supplement "Dooley compiles 16 selected essays by English philosopher Roger Scruton on topics ranging from conservative politics to sex, culture, the environment, wine, and hunting, which were written between 1986 and 2008 (most after 2000). He aims to present a companion to his volume Roger Scruton: The Philosopher on Dover Beach and a text for those wishing to teach Scruton's philosophy or become acquainted with his work. The first group of essays relate to Scruton's political conservatism, followed by sections on his theory of the nation and his ideas about sex and marriage, religion, knowledge, and the role of architecture in human life." -Eithne O'Leyne, BOOK NEWS, Inc.

The Roger Scruton Reader is the first comprehensive collection of Scruton's writings, spanning a period of thirty years. It gathers selections from some of his earliest works such as The Aesthetics of Architecture (1979) to his most recent Culture Counts (2007). The book also includes a good number of unpublished essays. It is made up of five sections - the last section of all contains some of Scruton's most pugilistic pieces on Dawkins and on The Iraq War.
Scruton holds Burkean political views and his book The Meaning of Conservatism was a response to the growth of liberalism in the Conservative party. At all times he is concerned to shift the right way from economics towards moral issues such as sex education and censorship laws. But he has in fact written on almost every aspect of philosophy - always in prose which is accessible and written with pellucid clarity.