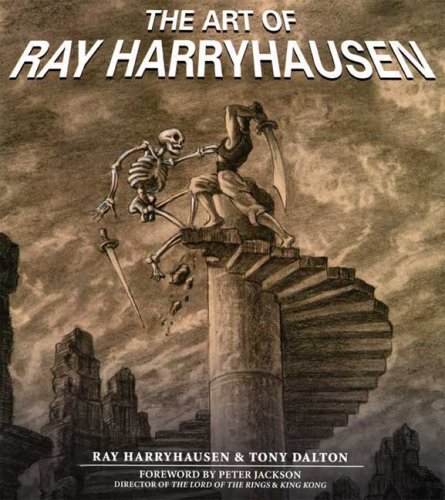 As one of the most highly acclaimed stop-motion animators in movie history, Ray Harryhausen was responsible for the dinosaurs, animals, mythological creatures, and aliens in such classic films as The 7th Voyage of Sinbad, King Kong, Jason & The Argonauts, and War of the Worlds. These extraordinary creatures stole scene after scene from human actors, and this book shows how he developed them.

When writing his autobiography, An Animated Life, Ray Harryhausen and Tony Dalton realized that they were working with a collection of art too extensive to share in one book. As a result, this companion volume lets readers explore the hoard of artwork that Harryhausen has preserved in his London home.

Reproduced to the highest standards, this artwork includes preliminary sketches, elaborate drawings of key scenes, and storyboards, all produced as he prepared to undertake the laborious task of animating each creature. Also shown here are the tiny, elaborately articulated models that Harryhausen created to play enormous roles, and the bronzes he cast to preserve their forms in perpetuity.

The stunning array of images in this book is a tribute to the vast scope of Harryhausen’s imagination and artistic skills. It is a collection that no one interested in special effects or cinema history can do without.

Ray Harryhausen is universally revered as the grandmaster of special effects in the pre-computer age. His indelible film work includes Jason and the Argonauts (1963) and The Clash of the Titans (1991). He received an honorary Oscar in 1992 and a star on the Hollywood walk of fame in 2003. He was born in Los Angeles, but now lives in London with his wife Diana. Tony Dalton has known Ray for over thirty years, having met him when he was first working at the British Film Institute. Not only was he involved in the publicity for Star Wars, Towering Inferno and The Omen, but he has also worked as a film historian and writer. He now runs his own archive research company. Together, they have previously written Ray's autobiography, An Animated Life. Peter Jackson, Foreword - Director of the Lord of the Rings trilogy and King Kong