Climate Change and the Future of Cities (Public Culture 79, May 2016)

Climate Change and the Future of Cities (Public Culture 79, May 2016) 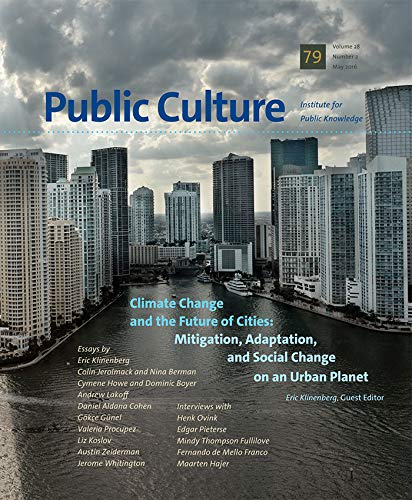 We live in the age of extremes, a period punctuated by significant disasters that have changed the way we understand risk, vulnerability, and the future of communities. Violent ecological events such as Superstorm Sandy attest to the urgent need to analyze what cities around the world are doing to reduce carbon emissions, develop new energy systems, and build structures to enhance preparedness for catastrophe. The essays in this issue illustrate that the best techniques for safeguarding cities and critical infrastructure systems from threats related to climate change have multiple benefits, strengthening networks that promote health and prosperity during ordinary times as well as mitigating damage during disasters. The contributors provide a truly global perspective on topics such as the toxic effects of fracking, water rights in the Los Angeles region, wind energy in southern Mexico, and water scarcity from Brazil to the Arabian Peninsula. Contributors: Nina Berman, Dominic Boyer, Daniel Aldana Cohen, Goekce Gunel, Cymene Howe, Colin Jerolmack, Eric Klinenberg, Liz Koslov, Andrew Lakoff, Valeria Procupez, Jerome Whitington, Austin Zeiderman

Eric Klinenberg is Professor of Sociology and Director of the Institute for Public Knowledge at New York University. He is the author of several books including Going Solo: The Extraordinary Rise and Surprising Appeal of Living Alone, and is a former editor of Public Culture.