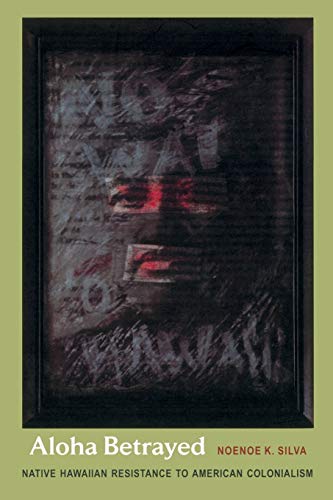 "With its substantial and thoughtful reading of the Hawaiian-language archive, Aloha Betrayed makes a major contribution to this reexamination of history." -- Sally Engle Merry * Contemporary Pacific * "This slender volume packs quite a punch. . . . [A]n important study." -- Mansel G. Blackford * Journal of American History * "Readers interested in the colonial encounter, Hawaiian history, the politics of language and literature, cultural studies, indigenous rights and post-colonial theory will find Aloha Betrayed a provocative book. The language is accessible, the content well-researched and coherently written, and students will find the conclusions at the end of each of the five chapters particularly useful." -- Robert Nicole * Journal of the Polynesian Society * "[P]rovocative. . . . [A] bold and unapologetic revisionist history." -- Eric T. L. Love * American Historical Review * "[B]rilliant. . . . This book is a superb contribution to the ongoing process of decolonization, recovery, and overcoming the suppression of Kanaka Maoli knowledge. Silva's clearly written account based on her original research is a gift to all Kanaka Maoli, especially those currently engaged in the restoration of Hawaiian sovereignty. This book-the fruition of Silva's meticulous and beautiful intellectual labor-is sure to win awards for its value and contribution to knowledge in the fields of political science, history, American studies, and indigenous studies, just to name a few." -- J. Kehaulani Kauanui * The Hawaiian Journal of History * "[A] fresh new approach to the critique of colonial historiography." -- Lyn Carter * Contemporary Pacific * "Aloha Betrayed represents a maturation of Native Hawaiian scholarship in the past two decades based on diligent investigation of critical primary sources. In that sense, it is a milestone of the first phase of contemporary Native Hawaiian scholarship and also a native 'takeover' of the historiography of modern Hawai'i." -- Taro Iwata * Journal of American Ethnic History * "Noenoe K. Silva has located an enormous Hawaiian-language archive of Native resistance to American colonialism in the 1897 petitions against forced annexation to the United States. Now, thanks to Silva's pathbreaking book, the Native side of the story will finally be told. And what a story it is! Those accustomed to the `happy Native' tourist image of Hawai'i will be shocked to learn that Hawaiians never wanted to be Americans; indeed, they revolted against the American military takeover. Today, Silva's analysis is key to the ongoing indigenous movement for Hawaiian sovereignty."-Haunani-Kay Trask, author of From a Native Daughter: Colonialism and Sovereignty in Hawai'i "Beautiful and irresistible are the peoples' voices, in their own language and in essays, stories, poetry, and song. Their hidden transcripts and their resistance to oppression reveal a love of the land and a determined and sustained rejection of the colonizers' imposed silences. Aloha Betrayed offers a devastating critique of colonial historiography and, crucially, a firm foundation for nation-building."-Gary Y. Okihiro, author of Common Ground: Reimagining American History

In 1897, as a white oligarchy made plans to allow the United States to annex Hawai'i, native Hawaiians organized a massive petition drive to protest. Ninety-five percent of the native population signed the petition, causing the annexation treaty to fail in the U.S. Senate. This event was unknown to many contemporary Hawaiians until Noenoe K. Silva rediscovered the petition in the process of researching this book. With few exceptions, histories of Hawai'i have been based exclusively on English-language sources. They have not taken into account the thousands of pages of newspapers, books, and letters written in the mother tongue of native Hawaiians. By rigorously analyzing many of these documents, Silva fills a crucial gap in the historical record. In so doing, she refutes the long-held idea that native Hawaiians passively accepted the erosion of their culture and loss of their nation, showing that they actively resisted political, economic, linguistic, and cultural domination. Drawing on Hawaiian-language texts, primarily newspapers produced in the nineteenth century and early twentieth, Silva demonstrates that print media was central to social communication, political organizing, and the perpetuation of Hawaiian language and culture. A powerful critique of colonial historiography, Aloha Betrayed provides a much-needed history of native Hawaiian resistance to American imperialism.