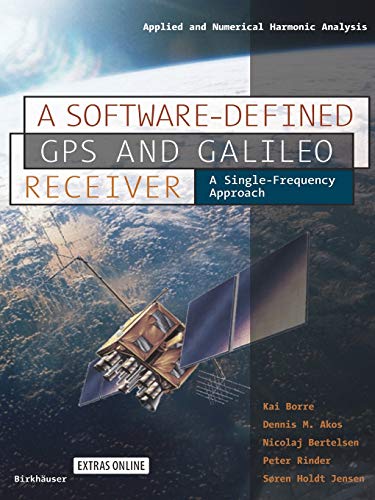 "The book is devoted to this subject [GPS] and at the same time to [the] Galileo System, a forthcoming European satellite-based navigation system. Both of them belong to the Global Navigation Satellite System (GNSS). The exposition is given in the frame of Software-defined Radios, which designates a technology which is based on a flexible open-architecture receiver that permits [building] a dynamic connection of various modules. The work of this platform is described in a MATLAB coding language...It is worthy to mention that Windows and LINUX can be used. The book is intended for applied mathematicians, electrical engineers, geodesists and graduate students as a reference book as well for self-study."   ―Zentralblatt MATH

"This excellent book will give you the mathematical fundamentals for software-based GPS ... . The included MATLAB source code can be used to crunch the collected data to solve for position. This low level processing gives the user a keen insight into the signal processing of a GPS receiver. The provided algorithms encourage user modification to attempt to improved and design next generation GPS receivers."   ―SparkFun Electronics

This book explore the use of new technologies in the area of satellite navigation receivers. The presentation unfolds in a user-friendly style and goes from the basics to cutting-edge research.

1. A Software-Defined GPS and Galileo Receiver : A Single-Frequency Approach

Buchbeschreibung Springer Basel AG Nov 2006, 2006. Taschenbuch. Zustand: Neu. Neuware - Satellite navigation receivers are used to receive, process, and decode space-based navigation signals, such as those provided by the GPS constellation of satellites. There is an increasing need for a unified open platform that will enable enhanced receiver development and design, as well as cost-effective testing procedures for various applications. This book provide hands-on exploration of new technologies in this rapidly growing field.One of the unique features of the work is the interactive approach used, giving readers the ability to construct their own Global Navigation Satellite Systems (GNSS) receivers. To construct such a reconfigurable receiver with a wide range of applications, the authors discuss receiver architecture based on software-defined radio (SDR) techniques. The presentation unfolds in a systematic, user-friendly style and goes from the basics to cutting-edge research.Additional features and topics include:Presentation of basic signal structures used in GPS and Galileo, the European satellite navigation systemDesign and implementation of a GPS signal generatorPresentation and analysis of different methods of signal acquisition serial search; parallel-frequency space search; and parallel-code phase search as well as code/carrier tracking and navigation data decodingA complete GPS software receiver implemented using MATLAB code as well as GPS and GIOVE-A signal records allowing readers to change various parameters and immediately see their effectsMATLAB-based exercisesA hands-on method of testing the material covered in the book: supplementary front-end hardware equipment which may be purchased at enables readers working on a Windows or LINUX system to generate real-world data by converting analog signals to digital signals Supplementary course material for instructors available at Bibliography of recent results and comprehensive indexThe book is aimed at applied mathematicians, electrical engineers, geodesists, and graduate students. It may be used as a textbook in various GPS technology and signal processing courses, or as a self-study reference for anyone working with satellite navigation receivers. 176 pp. Englisch. Artikel-Nr. 9780817643904