Improper Life: Technology and Biopolitics from Heidegger to Agamben (Posthumanities) 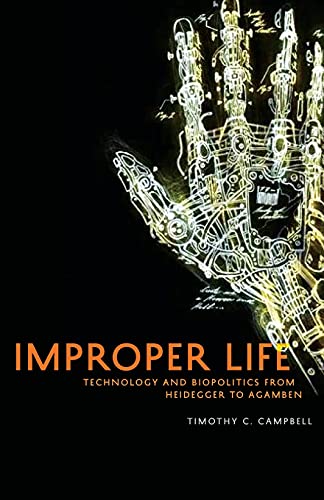 "Broadening biopower beyond its Nazi encampments in order to build a critique of liberalism, Timothy C. Campbell argues that modern politics captures life through invasive technologies of communication and consumption that promise protection from mortality, disability, boredom, and loneliness. Campbell links mass media and bioengineering to the birth of a global petty bourgeoisie defined by a terrifying lack of distance and the relentless dismantling of community. This compelling, powerfully argued book should be read by anyone interested in the futures of collective life in the age of smart bombs and cloud computing." -Julia Reinhard Lupton, author of Thinking with Shakespeare: Essays on Politics and Life

Has biopolitics actually become thanatopolitics, a field of study obsessed with death? Is there something about the nature of biopolitical thought today that makes it impossible to deploy affirmatively? If this is true, what can life-minded thinkers put forward as the merits of biopolitical reflection? These questions drive Improper Life, Timothy C. Campbell's dexterous inquiry-as-intervention.Campbell argues that a "crypto-thanatopolitics"can be teased out of Heidegger's critique of technology and that some of the leading scholars of biopolitics-including Michel Foucault, Giorgio Agamben, and Peter Sloterdijk-have been substantively influenced by Heidegger's thought, particularly his reading of proper and improper writing. In fact, Campbell shows how all of these philosophers have pointed toward a tragic, thanatopolitical destination as somehow an inevitable result of technology. But in Improper Life he articulates a corrective biopolitics that can begin with rereadings of Foucault (especially his late work regarding the care and technologies of the self), Freud (notably his writings on the drives and negation), and Gilles Deleuze (particularly in the relation of attention to aesthetics).Throughout Improper Life, Campbell insists that biopolitics can become more positive and productively asserts an affirmative techne not thought through thanatos but rather practiced through bios.