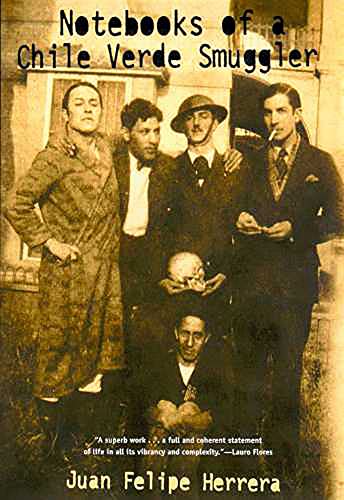 "Built to deliver a hot green flavor ... This book, too good to ignore, should be Herrera's breakthrough." "Herrera skillfully confounds preconceptions and prejudices, laying nonviolent dynamite under the tracks of those who would box him in. . . . This book, too good to ignore, should be Herrrera's breakthrough."--Publishers Weekly "Herrera guides us on a spiritual search for personal and racial identity that is carried out with an arresting display of diversity and virtuosity. . . . As a veritable smorgasbord of originality, this work shows us a writer at the height of creative powers."--Library Journal "Throughout its exuberant, flash-card allocation of poetry, letter-excerpts (that are themselves prose poems), snapshot recollections, antique photos and even a brief screenplay, such organizing principles as chronology, theme and form crumble before Herrera's endearingly personable voice. . . . Notebooks of a Chile Verde Smuggler is a convincing testament to the emergence of Juan Felipe Herrera's voice as the ultimate and enduring triumph of his literary deeds."--San Francisco Chronicle "The inimitable and prolific Juan Felipe Herrera continues to defy and redefine the boundaries of poetics. . . . Herrera's energetic display of language is as close to acrobatics as poetry will ever achieve. . . . Piquant and poignant, the uncovered notebooks are now the public's treasures."--El Paso Times

Raucous adobe hearts and urban violet mascara. Televised immigration games and ethnic sit-coms. Chile con karma served on a bed of race. In a startling melange of poetry, prose, journal entries, and even a screenplay, Zen Chicano desperado Juan Felipe Herrera fixes his gaze on his own life and times to craft his most personal work to date. Notebooks of a Chile Verde Smuggler is a river of faces and phrases, jottings and reflections a personal pilgrimage and collective parade of love, mock-prophecy, and chiste. Tuning in voices from numerous time zones, languages, and minds, Herrera recalls his childhood and coming of age, his participation in the Chicano Movement, and the surreal aspects of postmodern America. He uses broad strokes to paint a historical, social, and familial portrait that moves from the twilight of the nineteenth century to the dawn of the twenty-first, then takes up a finer brush to etch the eternal tension between desire and frustration, hope and disillusionment, violence and tenderness. Here are transamerican sutras spanning metrocenters from Mexico City to San Francisco, or slinking across the border from Juarez to El Paso. Outrageous, rhythmic lists "Foodstuffs They Never Told Us About," "Things Religion Makes Me Do" that fire the imagination. Celebrations of his Plutomobile that "runs on ham hawks & bird grease," and of Chicano inventions such as cilantro aftershave and "the art of eating Vicks VapoRub with your dedos." Pushing forms to the edge of possibility while forcing readers to rethink reality as well as language, Herrera invokes childhoods and neighborhoods, stand-up clowns and Movimiento gypsies, grandmothers of the bunuelo kitchen and tragicomic soliloquies of dizzy-headed outcasts of paradise. Notebooks of a Chile Verde Smuggler is a crucible of flavorful language meant to be rolled lazily on the mind's tongue and then swallowed whole to let its hot and savory sweetness fill your soul.