Yount, Lisa Right to Die and Euthanasia (Library in a Book)

Right to Die and Euthanasia (Library in a Book) 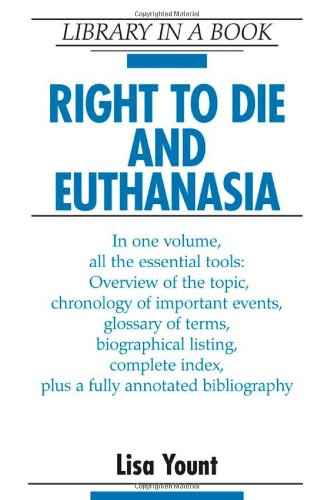 .,."offers a first-stop research source on a particularly important issue in contemporary America--immigration--for individuals just beginning to investigate the topic. Academic but accessible to thegeneral reader."

The United States, and indeed the Western world, is bitterly divided on the issues of the right to die and euthanasia. Polls reported in 2004 indicated that between four and 10 percent of physicians helped to end a terminally ill patient's life at some time, even though such acts are against the law. Legislators, judges, and ordinary citizens have become embroiled in the passionate battle over the ""right to die."" Meanwhile, health care professionals, philosophers and religious leaders, and disabled or severely ill people and their families continue to debate whether, and under what circumstances, euthanasia or assistance in suicide is a valid ethical or moral choice. ""Right to Die and Euthanasia"", the newly updated edition of ""Physician-Assisted Suicide and Euthanasia"", starts with an overview of the history of this topic, as well as the opinions surrounding it, ranging from the trial of Socrates in ancient Greece to the recent battle over the fate of Terri Schiavo in Florida. Contemporary case studies such as Wendland v. Wendland and Gonzales v. Oregon provide multiple perspectives and decisions surrounding this issue while also plotting a course for how this debate will play out in the future. This invaluable volume also features capsule biographies, a large annotated bibliography, graphs and a table, a chronology of significant events, organization and agency listings, and a glossary. Balanced and objective, ""Right to Die and Euthanasia"" allows students, teachers, librarians, medical personnel, and the general reader to explore the heart of this controversy. Coverage includes: the distinctions between refusal of life-prolonging treatment, the request for assistance in suicide, and the request for death actively caused by another person; who has the right to determine whether a person's life is ""worth living""; the alternatives to assisted suicide and euthanasia; whether courts or legislatures have the power to overrule a competent adult's decision; the needed safeguards; and the physicians' roles in the treatment of the terminally ill.