Szymanski, S: National Pastime: How Americans Play Baseball and the Rest of the World Plays Soccer 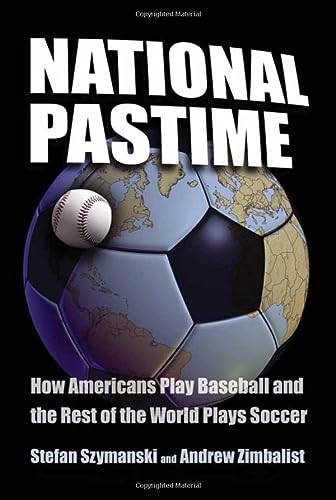 "Fascinating reading for fans and sports business industry professionals alike. The book gives a comprehensive overview of the commercial histories and complicated economic dynamics of two of the world's most important sports. The comparison between the two creates a unique perspective and enables the reader to understand the issues at stake with much greater insight." --Arne Rees, UEFA Head of Strategy and Business "A detailed, thoughtful analysis on one of the great mysteries in sports--why baseball is popular in America while soccer reigns in the rest of the world. NATIONAL PASTIME is a revealing look at both sports, detailing everything from economic history to issues of competitive balance." --Ken Rosenthal, Sporting News "The authors show us that [baseball and soccer] have more in common than their audience base would suggest, in terms of both business and culture... This worthy sports business book is recommended for most public libraries." --Morey Berger, St. Joseph's Hospital Library, Tucson, Library Journal, 5/1/2005 "This book is excellent reading for anyone interested in the mechanics of how professional sports operate, and how they came to be the way they are." --Scott Wickstein, ubersportingpundit.com, 5/15/2005 "An entertaining and informative book... If you are interested in the historical and economic parallels between these sports, this book is a solid source of information." --Phil Miller, The Sports Economist, 6/4/2005 "NATIONAL PASTIME is the first serious attempt at bridging the cultural gap between these two worlds of sport. It's also a great deal of fun, written with the understanding of scholars and the passion of fans." --Allen Barra, Wall Street Journal "This book has few shortcomings...and many strengths, not least of them keen insights and a readable stem-to-stern account of similarities and differences in the evolution, structures, and problems with arguably the globe's two most important sports. Essential." -- CHOICE, 11/1/2005 "Whether you prefer Beckham or Bonds, the Boston Red Sox, or the Manchester United, you will be enlightened by this examination of the similarities and differences as seen by two of the sharpest minds in the field of sports business." --Bob Costas, NBC and HBO Sports "Szymanski and Zimbalist wonderfully weave cross-cultural comparisons and tales of evolution that will leave you with a refreshingly new perspective on leagues and how they are structured." --Julie Foudy, recently retired captain, U.S. Soccer women's national team "I knew in advance this was going to be a very good work. As it turns out, NATIONAL PASTIME is truly wonderful, not just very good. It will have broad appeal, enlightening sports scholars and commentators as well as executives in each sport in different countries about the nature of any problems they are now exhibiting." --Paul C. Weiler, Harvard Law School "A fascinating new book." --John Haydon, The Washington Times, 9/24/2005 "National Pastime is a must read for American followers of world football." -- Football Fan-atic blog, 2/10/2007 "The result is an entertaining and informative book that will appeal to lay readers interested in the common origins and different growth paths of soccer and baseball, as well as professionally-trained economists interested in the economics of sports...Szymanski and Zimbalist have written a readable and well-researched book that touches on most of the important topics in the economics of sports teams and leagues: the demand for the sport; the labor market in the sport; and the relationship between sports teams (and leagues) and government...this book is a solid source of information and a recommended addition to the fan's library." --Phil Miller, The sports economist "an important piece of scholarship for those interested in the future of baseball on both the national and international levels." --Ron Briley, Nine, 9/30/2006

This is the story of two great sports. One is "America's game," while the other is "the world's game." Baseball and soccer are both beloved cultural institutions. What draws fans to one game is often a mystery to fans of the other. Despite superficial differences, however, the business and culture of these sports share more in common than meets the eye. This is the first in-depth, cross-cultural comparison of these two great pastimes and the megabusinesses that they have become. In National Pastime, Stefan Szymanski and Andrew Zimbalist illustrate how the different traditions of each sport have generated different possibilities for their commercial organization and exploitation. They pay special attention to the rich and complex evolution of baseball from its beginnings in America, and they trace modern soccer from its foundation in England through its subsequent expansion across the world. They illustrate how Victorian administrators laid the foundation for Major League Baseball (MLB) and soccer leagues such as the English Premier League, Italy's Serie A, and the European Champions League. The authors show how the organizers of baseball and soccer have learned from each other in the past and how they can continue to do so. Both sports are rich in tradition. In some cases, however, these traditions -often arbitrary rules established by long-defunct administrators -have obstructed the healthy development of the sport. By studying the experiences of other sports, it might be possible to develop new and better ways to operate. For example, soccer might benefit from greater cooperation among teams as in baseball. On the other hand, MLB could learn from soccer's relegation rules and more open system of ownership, thus avoiding some of the excesses (competitive imbalance, uneven team resources) associated with monopoly. National Pastime does not advocate the jettisoning of all tradition to adopt wholesale the approach of another sport, of course. In an era of globalization, where business interests are increasingly looking to transplant organizational ideas in order to maximize profits, the authors argue that fan-friendly reforms may be necessary in order to avoid something worse. Ultimately, they propose no simple solutions, instead suggesting specific reforms to the organization of baseball and soccer, drawing on each other's experiences. Lively and accessibly written, this book is essential reading for business analysts, journalists, policymakers, and managers of both sports. Most of all, however, it will appeal to baseball and soccer aficionados, whether they root for the New York Yankees, Manchester United, or Real Madrid.