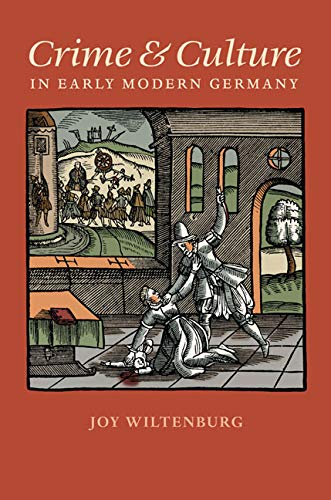 [W]hat Wiltenburg has achieved here is to offer a subtle reading of crime stories as they reveal the central concerns, anxieties, and fears of a society in transition but one also possessing a new way of dealing with reality: print. It is an exhilarating view and reminds us once more how indebted historians are to a criminal past. --Renaissance Quarterly No work to date has made such a close and persuasive cultural analysis of popular German crime literature. Wiltenburg masterfully balances meticulous attention to the texts themselves with impressive insights into the thinking of authors and readers alike. Her style is consistently fluent and her translations outstanding. --Joel F. Harrington, Vanderbilt University

With the growth of printing in early modern Germany, crime quickly became a subject of wide public discourse. Sensational crime reports, often featuring multiple murders within families, proliferated as authors probed horrific events for religious meaning. Coinciding with heightened witch panics and economic crisis, the spike in crime fears revealed a continuum between fears of the occult and more mundane dangers. In Crime and Culture in Early Modern Germany, Joy Wiltenburg explores the beginnings of crime sensationalism from the early sixteenth century into the seventeenth century and beyond. Comparing the depictions of crime in popular publications with those in archival records, legal discourse, and imaginative literature, Wiltenburg highlights key social anxieties and analyzes how crime texts worked to shape public perceptions and mentalities. Reports regularly featured familial destruction, flawed economic relations, and the apocalyptic thinking of Protestant clergy. Wiltenburg examines how such literature expressed and shaped cultural attitudes while at the same time reinforcing governmental authority. She also shows how the emotional inflections of crime stories influenced the growth of early modern public discourse, so often conceived in terms of rational exchange of ideas.