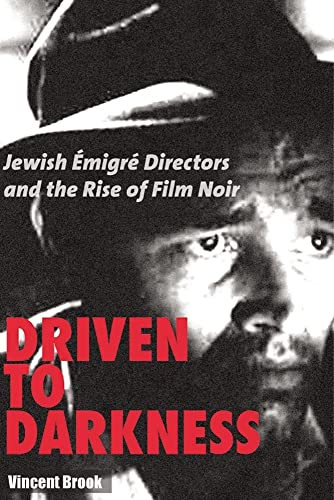 "Driven to Darkness is an erudite, engaging and ultimately enlightening volume that shines a spotlight on a neglected corner of American cinema history." - Lester Friedman, Hobart and William Smith Colleges "... deeply important contribution to the study of noir... persuasively argues for the inclusion of W. Lee Wilder and Robert Siodmak in the noir canon, among other influential auteurs, and displays a remarkable degree of scholarship and detail, and includes several personal interviews by the author. The detail on the plight of German Jews under the Nazi regime, particularly, is superbly realized." - Wheeler Winston Dixon, coauthor of A Short History of Film"

From its earliest days, the American film industry has attracted European artists. With the rise of Hitler, filmmakers of conscience in Germany and other countries, particularly those of Jewish origin, found it difficult to survive and fled - for their work and their lives - to the United States. Some had trouble adapting to Hollywood, but many were celebrated for their cinematic contributions, especially to the dark shadows of film noir. ""Driven to Darkness"" explores the influence of Jewish emigre directors and the development of this genre. While filmmakers such as Fritz Lang, Billy Wilder, Otto Preminger, and Edward G. Ulmer have been acknowledged as crucial to the noir canon, the impact of their Jewishness on their work has remained largely unexamined until now. Through lively and original analyses of key films, Vincent Brook penetrates the darkness, shedding new light on this popular film form and the artists who helped create it.