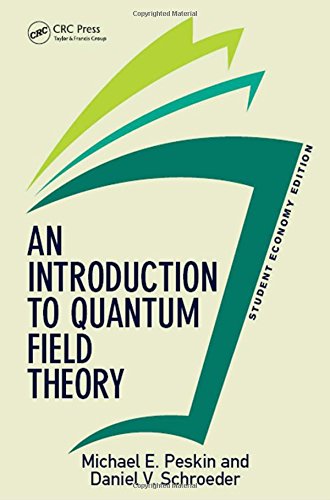 Westview Press is pleased to offer a new, paperback Student Economy Edition of our best-selling title, Introduction to Quantum Field Theory. This Student Economy Edition contains the same material as the hardcover Introduction to Quantum Field Theory (ISBN: 9780201503975)- the same text, the same equations, and the same page numbers- and is available to own for about the same price as renting the print book. An Introduction to Quantum Field Theory is a textbook intended for the graduate physics course covering relativistic quantum mechanics, quantum electrodynamics, and Feynman diagrams. The authors make these subjects accessible through carefully worked examples illustrating the technical aspects of the subject, and intuitive explanations of what is going on behind the mathematics. After presenting the basics of quantum electrodynamics, the authors discuss the theory of renormalization and its relation to statistical mechanics, and introduce the renormalization group. This discussion sets the stage for a discussion of the physical principles that underlie the fundamental interactions of elementary particle physics and their description by gauge field theories.

Michael E. Peskin received his doctorate in physics from Cornell University and has held research appointments in theoretical physics at Harvard, Cornell, and CEN Saclay. In 1982, he joined the staff of the Stanford Linear Accelerator centre, where he is now Professor of Physics.Daniel V. Schroeder received his doctorate in physics from Stanford University in 1990. He held visiting appointments at Pomona College before joining the faculty of Weber State University, where he is now Associate Professor of Physics.