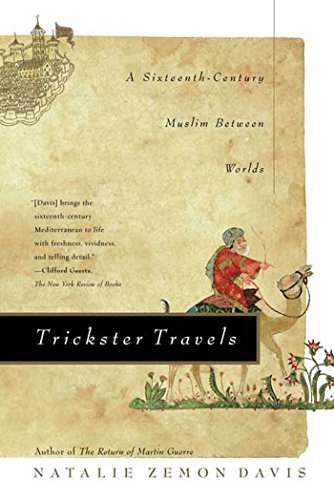 "Brings the sixteenth-century Mediterranean to life with freshness, vividness, and telling detail." --Clifford Geertz, The New York Review of Books

"A beautifully written and thoughtful book that shows off some of the sophisticated tools for reading and parsing evidence that historians have been developing in recent years." --Peter N. Miller, The New Republic

"Trickster Travels is a masterpiece of the historian's craft and craftiness. A brilliant storyteller, Natalie Zemon Davis reconstructs the life of Al-Hasan al-Wazzan, the great Renaissance geographer known to the West as Leo Africanus. And what a life it was: exile from Muslim Spain in the wake of the Catholic conquest; restless travels in Africa in the service of the sultan of Fez; capture by pirates and imprisonment in Rome; conversion to Christianity and release from prison; an outpouring of remarkable books, introducing Africa and Islam to European intellectuals; and finally a return to North Africa and to the language, culture and faith in which he had been raised. Davis' great gift lies not only in her tenacious ability to follow this twisting path but also in her scholarly determination to tease out its rich implications. This is an essential book for anyone who wishes to understand what it means to live between two violently warring worlds." --Stephen Greenblatt

"Natalie Zemon Davis offers the first comprehensive reconstruction of Al Wazzan's life in Trickster Travels. Drawing on archival material and the accounts of contemporaries, the distinguished historian and author of The Return of Martin Guerre gives a fresh interpretation of "The Description of Africa" and Al Wazzan that grounds him in the 16th century world through which he traveled . . . Davis beautifully renders the chapters of Al Wazzan's life." --Joshua Jelly-Schapiro, Los Angeles Times

An engrossing study of Leo Africanus and his famous book, which introduced Africa to European readers

Al-Hasan al-Wazzan--born in Granada to a Muslim family that in 1492 went to Morocco, where he traveled extensively on behalf of the sultan of Fez--is known to historians as Leo Africanus, author of the first geography of Africa to be published in Europe (in 1550). He had been captured by Christian pirates in the Mediterranean and imprisoned by the pope, then released, baptized, and allowed a European life of scholarship as the Christian writer Giovanni Leone. In this fascinating new book, the distinguished historian Natalie Zemon Davis offers a virtuoso study of the fragmentary, partial, and often contradictory traces that al-Hasan al-Wazzan left behind him, and a superb interpretation of his extraordinary life and work.

In Trickster Travels, Davis describes all the sectors of her hero's life in rich detail, scrutinizing the evidence of al-Hasan's movement between cultural worlds; the Islamic and Arab traditions, genres, and ideas available to him; and his adventures with Christians and Jews in a European community of learned men and powerful church leaders. In depicting the life of this adventurous border-crosser, Davis suggests the many ways cultural barriers are negotiated and diverging traditions are fused.