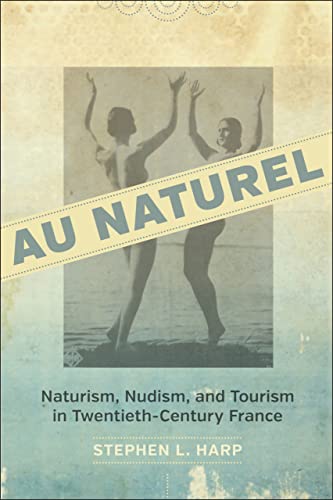 Each year in France approximately 1.5 million people practice naturisme or "naturism," an activity more commonly referred to as "nudism." Because of France's unique tolerance for public nudity, the country also hosts hundreds of thousands of nudists from other European nations, an influx that has contributed to the most extensive infrastructure for nude tourism in the world. In Au Naturel, historian Stephen L. Harp explores how the evolution of European tourism encouraged public nudity in France, connecting this cultural shift with important changes in both individual behaviors and collective understandings of the body, morality, and sexuality.

Harp's study, the first in-depth historical analysis of nudism in France, challenges widespread assumptions that "sexual liberation" freed people from "repression," a process ostensibly reflected in the growing number of people practicing public nudity. Instead, he contends, naturism gained social acceptance because of the bodily control required to participate in it. New social codes emerged governing appropriate nudist behavior, including where one might look, how to avoid sexual excitation, what to wear when cold, and whether even the most modest displays of affection -- -including hand-holding and pecks on the cheek -- were permissible between couples.

Beginning his study in 1927 -- when naturist doctors first advocated nudism in France as part of "air, water, and sun cures" -- Harp focuses on the country's three earliest and largest nudist centers: the Île du Levant in the Var, Montalivet in the Gironde, and the Cap d'Agde in Hérault. These places emerged as thriving tourist destinations, Harp shows, because the municipalities -- by paradoxically reinterpreting inde-cency as a way to foster European tourism to France -- worked to make public nudity more acceptable.

Using the French naturist movement as a lens for examining the evolving notions of the body and sexuality in twentieth-century Europe, Harp reveals how local practices served as agents of national change.

STEPHEN L. HARP is a professor of history and French at the University of Akron. He is the author of Marketing Michelin: Advertising and Cultural Identity in Twentieth-Century France and Learning to Be Loyal: Primary Schooling as Nation Building in Alsace and Lorraine, 1850--1940.