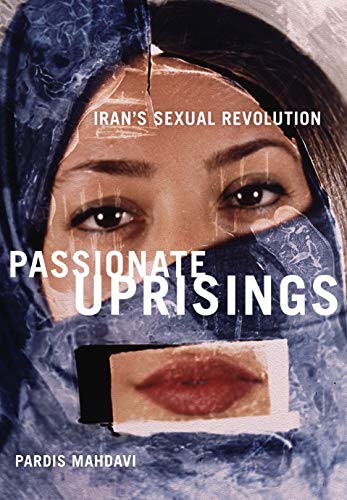 "The book is in essence an academic work but it will attract the general reader with its occasionally titillating subject matter (she does not shy away from describing sexual encounters and orgies). For Mahdavi's thesis is that the changes in sexual practices and in the sartorial choices of Iran's youth indicate a 'revolution' of conscious resistance to the regime." -- Financial Times "Passionate Uprisings dispels the one-dimensional and overly simplified view of Iran and its people through the oft-recycled image of women in veils." -- Women's Review of Books "Mahdavi's best and most groundbreaking material has to do with the public health implications of this rift between generations and between acknowledged and unacknowledged behaviors, as well as the society's slow and patchy but often ingenious educational response." -- The Nation "Passionate Uprisings offers a unique and amazing look into the ongoing Iranian sexual revolution. That's right-hot sex in the Islamic Republic! Mahdavi documents the secret parties, trysts, and even orgies of rebellious Iranian youth, constantly asking whether a sexual revolution can evolve into a political one. As a close friend of her informants and often a participant in their high-jinks, she's the perfect companion on this unlikely journey-sympathetic, knowledgeable and super-smart!" -- Barbara Ehrenreich * best-selling author of Bait and Switch: The (Futile) Pursuit of the American Dream (2005) * "The controversial change in sexual attitudes and mores the author documents is real, present, and a major factor in the transformation of Iranian life. I particularly welcome Mahdavi's sincere portrayal of Iranian women as strong, in control of their destinies, and able to make decisions for themselves, even if those decisions fly in the face of conventional morality. The book is exceptionally true and honest." -- William Beeman * University of Minnesota * "Passionate Uprisings carves a clear trail through the jungle of ideology about life in modern-day Iran, and breaks new ground to show how sex is used by young people in a Muslim country to resist political oppression. A fascinating book unlike any other." -- Sally Guttmacher * New York University * "Kudos to Pardis Mahdavi for shining the light on the most taboo subject in the Iranian culture, sex. Her book shows the degree to which the Islamic government has failed the younger generation-how the constant presence of the Morality Police and the accompanying lack of personal freedoms has led to a breakdown in morals. Mahdavi's work brings to the forefront the long-term consequence of this high-risk sexual behavior and the importance of basic personal freedoms, even under an Islamic government." -- Firoozeh Dumas * author of Funny in Farsi: A Memoir of Growing Up Iranian in America * "Part academic treatise, part titillation, Mahdavi's work argues that the social and sexual practices of the urban young adults 'who comprise two-thirds of Iran's population' constitute a form of political dissent and rebellion. While the punishments for premarital sex, drinking and dancing are severe, the author, a journalist and assistant professor of anthropology at Pomona College, captures a hedonistic, postadolescent and pure pop culture spirit, reflecting the interests and activities of the 'highly mobile, highly educated... underemployed' and secular young Tehranis she followed over a seven-year period." -- Publishers Weekly "Mahdavi's Tehran orgy signals a profound shift in post-revolutionary Iran, as young adults in a young world (two-thirds of the Iranian population consists of urbanites under 30) challenge the regime, although not by anything so political as street rebellion or samizdat pamphleteering. Their preferred methods of protest are sexual adventurism -- the orgy or drug and booze-fuelled party -- and sexual self-expression of a more subtle kind: skimpy underwear, worn beneath the hijab, sends a f..k-you message to the morality police and plants a sly inward smile on the face of the wearer. Passionate Uprisings will...dispel the ignorance in the West about Iran, its people and their tragedy. It should also check any residual sympathy anti-American Westerners may hold for the regime simply on account of its belligerence towards President George W. Bush. This is a cruel regime, loathed by its young citizenry, but it will not prove easy to dislodge." -- The Australian

There is perhaps no place in the world today where the stakes of partying and having sex are higher than in present-day Iran. Drinking and dancing can lead to arrest by the morality police and a punishment of up to 70 lashes. Consequences for sex outside of marriage can be even more severe-up to 84 lashes, or even public execution. But even under the threat of such harsh punishment, a sexual revolution is taking place. Iranian youth continually risk personal safety to meet friends, date, and, ultimately, to have sex. In the absence of any option for overt political dissent, young people have become part of a self-proclaimed revolution in which they are using their bodies to make social and political statements. Sex has become both a source of freedom and an act of political rebellion. With unprecedented access inside turn-of-the century Iran, Pardis Mahdavi offers a firsthand look at the daily lives of Iranian youth. They are given a voice as she tells the stories of their intertwined quests for sexual freedom, political reform, and a better future-but not a future without risk. The sexual revolution is also leading to increased levels of abortion, HIV/AIDS, sexually transmitted diseases, and ongoing emotional troubles and mental illnesses, with worrying implications for Iranian youth and Iranian society at large. Passionate Uprisings is a fascinating, ground-breaking, and personal look into a society that is poorly understood-if it is understood at all-by the majority of Westerners today. Mahdavi's narrative provides not only an invaluable insight into the real lives of much of Iran's population, but shows how sexual politics and the youth culture could even destabilize the current regime and change the course of Iranian politics.