Verwandte Artikel zu Just What Kind of Mother Are You?

Daly, Paula Just What Kind of Mother Are You?

Just What Kind of Mother Are You? 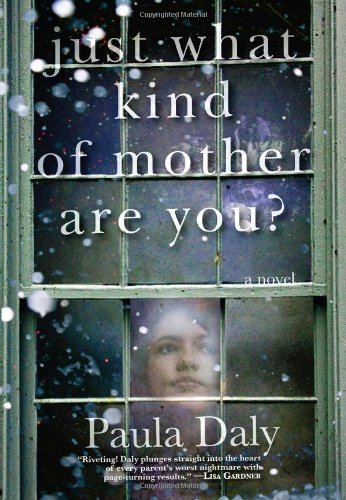 "A distinctive voice, masterful plotting, and pitch-perfect characterizations mark British author Daly's superb debut. . . . Daly's detailed, richly imagined world and surprising plot twists bring fresh life to the familiar theme of child abduction. In the end, the novel is not just an intriguing puzzle but also a nuanced exploration of friendship, motherhood, fallibility, and the mystery of human relationships." --Publishers Weekly (starred review), one of the Top Ten Thrillers of Fall 2013 "[A] taut novel. . . . A reminder that no woman has it all under control, not even in fiction." --O, the Oprah Magazine, one of Five Page-Turners of Fall 2013 "Daly's debut novel explores how interpersonal relationships wax and wane following the disappearance of a local child. . . . The storytelling and Daly's voice are top-drawer." --Kirkus Reviews "This intriguing blend of suspense tale and domestic drama, which has a number of delicious plot twists, will keep readers riveted. . . there is also much insight here into the power games that rule both female friendships and the relationships between husbands and wives. First-rate fiction from an outstanding new thriller writer." --Booklist (starred review) "Paula Daly's strong debut . . . is fiendishly addictive as well as perceptive about guilt and social class." --Guardian (UK) "What elevates this ordinary story is the extraordinary realism of the characters. As we're pulled into her class-conscious community, we root for [protagonists] Lisa, Joe and justice. Grade: A." --Cleveland Plain Dealer "Anything but predictable . . . a true mystery thriller that takes readers down a circuitous, agonizing path." --Florida Times-Union "It's almost impossible, if you have a heart of any size, to not get wrapped up right away in Lisa Kallisto's plight--the overwhelmed parent with a marital secret, too much work, too many pets, three kids, not enough time and not enough money. . . . It is a page-turner." --Scott Spinelli, Three Guys One Book "Riveting! Daly plunges straight into the heart of every parent's worst nightmare with page turning results. You know this family. You may even be one of these moms. And you will fly through this novel, as their pain, bewilderment, and ultimately determination becomes your own." --Lisa Gardner, #1 New York Times bestselling author of Touch & Go and Catch Me "One of the most hypnotically gripping books I've read in a long, long time. Masterfully written and utterly unputdownable, this thriller will surprise and astound you with every ingenious twist and turn." --Tess Gerritsen, New York Times bestselling author of Last to Die "A crackling good read, Just What Kind of Mother Are You? is a remarkable domestic thriller debut. Fueled by every parent's worst nightmare, Paula Daly takes you for an intense, gritty and heartbreaking roller-coaster ride. A writer to watch." --Julia Spencer-Fleming, New York Times bestselling author of One Was A Soldier "Just What Kind of Mother Are You? is an intricate, absolutely absorbing account of a series of chilling events that once unleashed will keep the reader riveted to the pages. A grave reminder of the heavy responsibility of being a mother, a wife, a friend. Hypnotic and harrowing right up to the pulse-pounding end. Unforgettable." --Heather Gudenkauf, New York Times and USA TODAY bestselling author of The Weight of Silence and These Things Hidden "The very definition of a page-turner--the sort of book that causes you to lose half a day without even noticing. Savour every page, because this will probably be your book of the year. With characters so real they can't possibly be made up, it's a brilliant, thrilling story of friendship, families and the sort of terrifying betrayal that can only happen to those closest to us." --Elizabeth Haynes, author of Into the Darkest Corner "A terrifying story that strips away all our preconceptions about love, loyalty, and friendship. Paula Daly writes so compellingly and convincingly about one mother's descent into the darkest of places, that we can't help but be dragged along with her. A fantastic debut." --Carla Buckley, author of Invisible "I read the book in just a few hours, gripped by the believable characters and switchbacks of the plot. Everyone will recognize the dilemmas in this book and hold their breath for the finale." --Claire McGowan, author of The Fall and Director of the Crime Writers' Association "Paula Daly's finely-wrought debut thriller deals with overburdened working women who are doing their best but are in danger of being swamped by the conflicting demands being placed upon them. Daly's characters are well-drawn, complex individuals who oftentimes are not what they seem to be, and her small-town settings seethe with twisted dynamics lurking just below the bucolic surfaces." --Lisa Brackmann, author of Rock Paper Tiger "A terrifically assured debut--a compelling read with a wholly appealing protagonist and great doses of humor along with the suspense." --Kathleen George, author of Simple and The Odds "An assured and nail-biting debut which gives an authentic portrayal of modern family life and the pressures of being a working mother. Daly writes eloquently about an ordinary family plunged into a nightmare and sets her story in the wintry landscape of the English Lakes. A tense and satisfying read." --Cath Staincliffe, author of Split Second and Dead to Me "This is a superb debut novel, which engages the reader from the first page and doesn't let up until the final twist at the very end. An unsettling portrayal of just how easily lives can unravel amid the pressures of modern life. Close the curtains, stoke up the fire and prepare for an excellent read." --Diane Janes, author of Why Didn't You Come for Me? "A cracking page turner that explores every woman's second worst nightmare: your child is safe but your friend's child goes missing on your watch. A highly enjoyable read." --The Bookseller

Lisa Kallisto--overwhelmed working mother--is the not-so-perfect model of the modern woman. She holds down a busy job running an animal shelter, she cares for three demanding children, and she worries that her marriage isn't getting enough attention. During an impossibly hectic week, Lisa takes her eye off the ball for a moment and her world descends into a living nightmare. Not only is her best friend's thirteen-year-old daughter missing, but it's Lisa's fault. To make matters worse, Lucinda is the second teenage girl to disappear within the past two weeks. The first one turned up stripped bare and abandoned on the main street after a horrible ordeal. Wracked with guilt over her mistake, and after having been publicly blamed by Lucinda's family, Lisa sets out to right the wrong. As she begins digging under the surface, Lisa learns that everything is not quite what it first appears to be. In Paula Daly's heart-stopping debut novel, motherhood, marriage, and friendship are tested when a string of abductions tear through a small-town community. Gripping and fast-paced, Just What Kind of Mother Are You? introduces an outstanding new thriller writer with a terrifying imagination for the horrors that lurk in everyday lives.