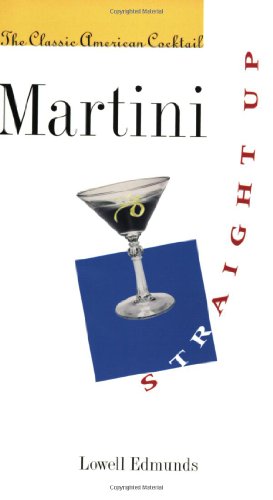 Whether or not you take your martini as seriously as Lowell Edmunds, this is an admirable account of the drink's place in the American dream.

Edmunds seems to have unearthed every reference to the martini since its creation sometime in the 1870s, and by researching recipe books from the late 19th and early 20th centuries, he has painstakingly reconstructed the actual history of a cocktail swaddled in myth. He tracked down the first shipment of French vermouth to the United States (from Noilly Prat, in 1851). He got the lowdown on Sherwood Anderson's unfortunate death-by-toothpick after drinking a martini. He compiled a list of every martini cartoon ever to appear in the New Yorker. The martini is the last word on cocktails. This book is the last word on the martini.

Few drinks achieve such complex and ambiguous symbolism as the martini, and likely few writers could decode it as well as the polished Edmunds... Such is the unadorned pleasure of Edmunds's book, its rare scholarly intimacy, that there can be little doubt that he delighted in his fieldwork very much.

Equal parts academic study, critical appraisal, and love letter, this book sees the martini as the liquid equivalent of jazz—a marvelous and misunderstood American art form... Edmunds fashions a convincing theory that places the feisty cocktail at the very heart of American civilization.

Edmunds treats us to a cultural history of the martini, from its origins in the Gilded Age to its 1990s symbolism... The drink may be dry, but this book is anything but.

[Edmunds] brings the rigor and thoroughness of a true scholar to the study of the Martini's place in American culture.

From its contested origins in nineteenth-century California; through its popularity among the smart set of the 1930s, world leaders of the 1940s, and the men in the gray flannel suits of the 1950s; to its resurgence among today's retro-hipsters: Lowell Edmunds traces the history and cultural significance of the cocktail H. L. Mencken called "the only American invention as perfect as a sonnet."