Hachķ, Alain The Physics of Hockey

The Physics of Hockey 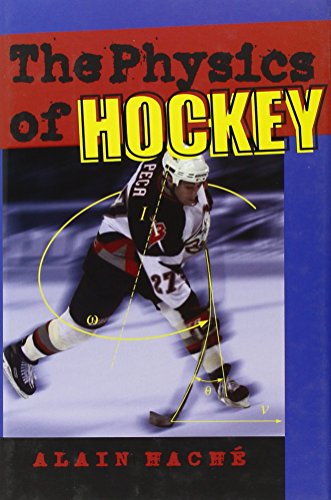 "Haché brings to this informative study the perspective of a physicist and amateur hockey player (goalie). He stints on neither the physics, which he presents clearly, nor the hockey, making the reader feel like going to a game."

"Intriguing... Haché is a physics professor and an amateur hockey player who combines his two passions in this book, which uses hockey to explain various aspects of physics, from thermodynamics to fluid dynamics."

"A book that will amuse and delight hockey lovers... Physical concepts are covered at a level that the average first year physics student would readily grasp. This book is highly recommended recreational reading for anyone with an inclination toward physics and an interest in the game."

"The Physics of Hockey opened my eyes to a whole new way of viewing and understanding the game I love. It is pure entertainment, cover to cover. Who would have guessed physics could be so much fun?"

"An incredibly well-written and very approachable book... For chemists in the audience..., there are several discussions laced throughout the text that border more on materials science than physics."

"Enjoyable to read... All aspects of the game are investigated and the mathematics are easy to follow."

"Many high school students will learn good science, and any reader will learn more about the game."

"A great book and well worth buying a copy."

"Well-written, scientifically interesting, and pitched at a level that will appeal to both the literate high school student and the professional scientist. Even hockey coaches might read it!"

"This is a book every hockey player needs and every hockey fan will love. Well written, complete and thoroughly enjoyable, it's a book you won't want to pass up."

What do Wayne Gretzky and thermodynamics have in common? A lot more than you might think. The game the National Hockey League calls " the coolest game on earth" is also a fast-paced, dynamic display of physics in action.

In The Physics of Hockey, physicist and amateur hockey player Alain Haché examines some of the physical principles behind the world's most popular winter team sport. What makes ice so slippery you can skate on it? How can you skate backwards most rapidly? How can physics improve your slapshot? Why do some collisions cause injuries but not others? How does a Zamboni work? And how do you prepare a pure, smooth ice surface in Dallas when it's 90 degrees outside and there are twenty thousand people inside?

This is physics by a hockey fan for the hockey fan. Haché investigates the properties of the ice surface, the science of skating and of skates, the odds of winning and losing streaks, and the principles behind shooting, hitting, and goaltending. Touching on topics such as solid-state physics, statistical physics elasticity, probability, thermodynamics, and mechanics, Haché uses science to enhance our appreciation and understanding of the game. The book is illustrated with photos and graphs and punctuated with anecdotes to show how famous players, past and present, are really physicists on skates.

A thought-provoking, fun, and gentle introduction to some basic issues in physics, The Physics of Hockey is a truly unique book worthy of the shelf of every hockey fan and physics enthusiast.